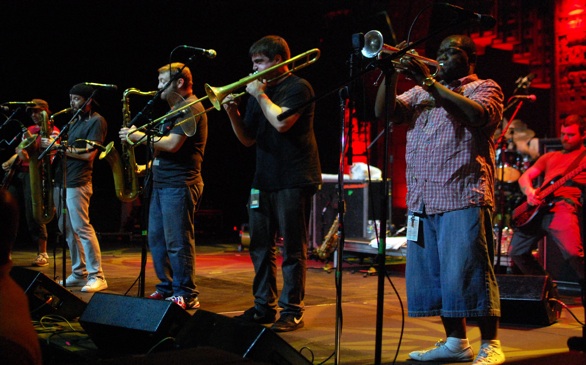 The seven-piece band is made up of trombones, saxophones, trumpets and more.
(Credit: Jacob Gaitan)

Who would have known that combining brass instruments with electric guitars and clashing cymbals would lead to complete anarchy and debacle? Apparently, that’s the recipe for satisfaction when it comes Streetlight Manifesto, the seven-piece punk/ska rock band from New Jersey.

From the moment saxophones mixed with trumpets and trombones, the energy surpassed anything that could be contained. Everyone in the general pit was an immediate target for physical enjoyment. The sweat was felt in the air upon finishing the first song, which included audience members singing along wildly to the appropriately suiting title “Everything Went Numb.”

Streetlight Manifesto has an unmatchable fan base. Between songs, the crowd provided strong chants and support for lead singer Tomas Kalnoky. “We love you Tomas!” and “You f*****’ rock!” became a song in itself during transitions.

On stage, Kalnoky paced back and forth with a guitar strapped around his shoulder, teetering with the idea of hoping over the barricade and joining the adrenaline-driven crowd that was over stimulated with excitement.

Once the music began, crowd surfing, circle pits and slam dancing spun like wild people stuck in a revolving door. Shoes, hats, shirts and anything else at arms reach flew throughout the venue air, resulting in complete and utter chaos. The barricade separating the fans from the stage trembled with the idea of folding, and the audience made their efforts relentless. Still, it managed to subdue the pressing strength of hundreds of loyal fans.

Saxophonist Jim Conti kept the simple side-to-side unison dancing routine with trumpet player Matt Stewart and trombonist Nadav Nirenberg. Kalnoky’s ability to shred guitar riffs without hesitation proved to be the fuel needed for drummer Chris Thatcher and bassist Pete McCullough. As a complete ensemble, the live music traveled through a plethora of emotions, which simmered for a few songs, especially acoustic attempts such as “A Call To Arms.”

The combining elements of destructive punk rock riffs melted over the dancing and hip-shaking ska melodies. Both layers of musical desire dissolved into an unforgettable experience. Streetlight Manifesto’s concert is not something that can be experienced while having feet planted to the ground. If the urge to move weren’t immediately received, someone within arms reach would gladly tumble over that person in disbelief. On that same note, the camaraderie and attention amongst one another in the pit proved to be a warm, yet challenging situation for those surfing on the heads of others and those forcefully carrying the bodies towards the front borders.

Streetlight Manifesto’s eight-week North American tour, which began mid-October, is something that must be experienced live before the year ends. Unlike major budget productions with intensive lighting equipment and props, these talented musicians simplify that cost by delivering hard-hitting notes and stellar performances that leave everyone in attendance craving for more. Its fifth album, The Hands That Thieve, is expected to release next month, with another speculated album to be released shortly after.

The sky is the limit for Streetlight Manifesto in 2013.