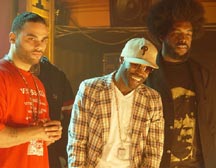 "You are not ready!" Truer words may never have been spoken by Black Thought, emcee for the legendary Roots crew. Following co-openers Medeski, Martin and Wood’s instrumental, funk-jazz set, Philadelphia-based band, The Roots, rocked the crowd with a pulsing 70-minute set of a bass-heavy, head-bopping live band experience. Debuting tunes off their current release The Tipping Point, new eyes and ears were opened to their patented ability to get even those most jaded to hip-hop on their feet.

Each member of The Roots had an intimate solo with the audience, with new guitarist Kirk Douglas performing a stunning display, seemingly possessed by the late Jimi Hendrix. For their finale, The Roots went through a medley of radio hits, including Beyonce’s Crazy In Love and Salt N Pepa’s Push It.

Headlining reggae-rock giants 311 belted out an awesome array of tunes from their arsenal of electrifying music, including old-school tunes "Unity," "Rub A Dub" and "Do You Right." Also included were fan favorites from their newly released greatest hits album, such as "Amber" and "Down," leaving fans with the positive vibe the band is well known for.