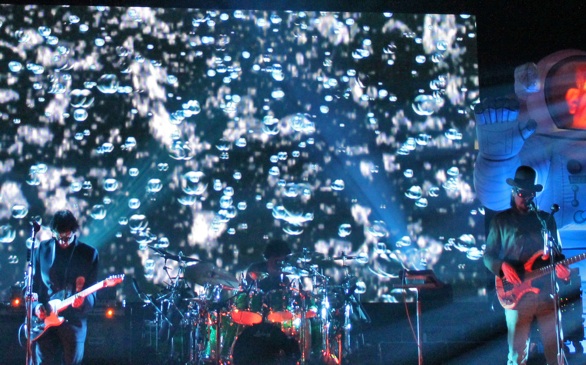 When Primus decided to hit the road this fall for its latest venture, the San Francisco alt-rockers wanted to do something they’ve never done before: They launched the first-ever 3D-enhanced tour.

Equipped with a special 3D backdrop screen and a quadraphonic sound system, Primus came to L.A. last weekend and threw down two mind-melting sets at The Wiltern.

If one thing was for sure, the nearly sold-out crowd (a Wiltern employee confirmed that only six tickets were left at the end of the night) definitely got its money’s worth — and maybe even a free pair of 3D glasses to take home.

Despite the theatre’s long security line that snaked around the block, the trio went well over the two-hour mark as it jammed out a host of early classics and delivered a couple of surprising covers.

Black Sabbath’s “Electric Funeral,” which opened the band’s two-song encore, was particularly gripping before Primus ended the show with an oldie but goodie — the thrashing, yet funky “Too Many Puppies” off its 1990 debut album, Frizzle Fry.

Plenty of other moments throughout the night were worthy of applause, but none left Primus fans quite as pumped up as a back-to-back run through “My Name Is Mud” and “Jerry Was a Race Car Driver” to close out the first set.

Donning an oversized top hat and a pair of bug-eye sunglasses, front man Les Claypool dazzled us with every note he plucked, strummed or slapped on his bass guitar. At the age of almost 50, he’s still a one-of-a-kind performer in spite of his vocal limitations.

What shouldn’t be lost in the midst of Claypool’s brilliant musicianship, though, is just how talented Primus’ other two members are, too.

Guitarist Larry LaLonde, who spent time playing in various metal bands such as Possessed and Blind Illusion, can more than pull his own weight, and he wasn’t afraid to prove it. Coming early in Primus’ second set, the Grammy-nominated “Wynona’s Big Brown Beaver” provided one of the best opportunities for “Ler” to unleash his chops before wowing more spectators with some serious shredding on “Tommy the Cat.”

Drummer Jay Lane, meanwhile, proved he’s not too shabby himself. Locked in with Claypool from the very start, the two took a few minutes in the second hour to jam out a groove while LaLonde gave his fingers a break. And when it came to tunes like “Eyes of the Squirrel” and “Hamburger Train,” Lane energized the audience with great precision and impeccable dexterity on the skins.

Sure, the song titles may sound a little strange, but with three guys in their mid-to-late 40s, Primus hasn’t forgotten how to rock.