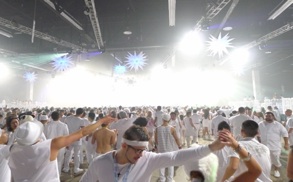 Insomniac, the promoter behind countless EDM festivals, booked out the Anaheim Convention Center for a New Year’s Eve celebration. The kick here is that white attire was required, resulting in a literal sea of white partygoers reveling in the night’s events and ringing in 2013 to infections grooves by some of the world’s biggest DJs.

With a lineup featuring Avicii, Above & Beyond, Swedish House Mafia’s Sebastian Ingrosso and 18-year-old wonder kid Madeon (who recently opened for Lady Gaga), the talent on board was impressive. However, despite the variety of DJs, the variety of music on hand was lacking as nearly every performer seemed to churn out the same house heavy tune over the course of the eight-plus-hour event.

Despite the long bathroom lines, the occasional overcrowding of the main stage resulting in barricades and the (to be expected) $10 dollar beers, the event went off without a hitch thanks to friendly security and a 21-and-over well behaved crowd. Insomiac is a veteran promoter, and it shows with their almost flawless execution of events of this size. The convention center proved to be a fantastic venue with plenty of space and a state of the art audio/visual experience.

You’d be hard pressed to find anyone that didn’t have a spectacular NYE experience at White Wonderland with its unique dress code and world-class music. While certainly not for everybody, events of this size and stature will continue to draw immense crowds.

White Wonderland will further serve as one of Southern California’s most appealing NYE events.