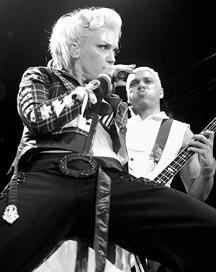 It was all about girl power when No Doubt hit the stage, with Gwen Stefani singing "Just A Girl" in her signature tight belly shirt and baggy pants. Although tons of girls crowded the stage, the boys no doubtedly enjoyed the band’s antics too, especially during "Bathwater," when Stefani appeared onstage with a troupe of girls in teddies, stilettos and bright pink boas that swirled around their bodies.

No Doubt’s live show was more like a Broadway performance with a variety of stage scenes, including a backdrop of stars against a deep blue sky for an acoustic version of "Running." Fan favorites included old-school tunes such as "Spiderwebs" from Tragic Kingdom, along with the bouncy "Hella Good" from the more recent Rock Steady. But the night’s highlight came when Stefani sang a heartfelt "Don’t Speak," dedicated to her brother, guitarist and No Doubt founding member, Eric Stefani.

High-pitched screams overtook the crowd when Alex Greenwald of openers Phantom Planet took the stage in his ripped T-shirt and jeans, looking like a cross between Ashton Kutcher’s good-looking brother and a Calvin Klein poster boy. The band played the popular "California" theme song of TV’s "The O.C.," along with "Big Brat," the dirty, psychedelic rock tune off their self-titled album.