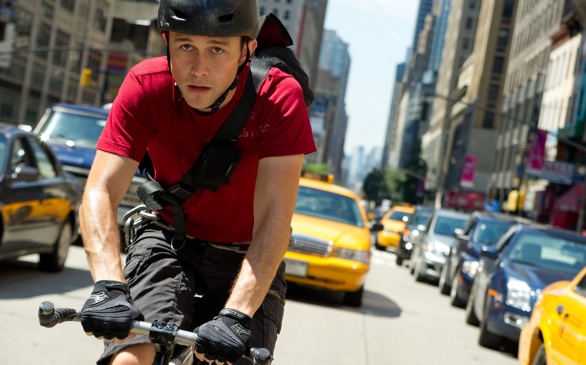 The Majors: Who can resist a good time travel flick? Looper stars Joseph Gordon-Levitt as a hitman who takes out targets sent from the future. But one day, he’s assigned to kill his future self (Bruce Willis). Director Rian Johnson creates a fully realized Blade Runner-esque future and tops it off with a witty script and great action.

Gordon-Levitt is also in the mindlessly fun thriller Premium Rush. This time, he’s a fearless New York bicycle messenger and the target of a corrupt cop who’s after his mysterious package, sparking a cat-and-mouse chase through Manhattan traffic.

Richard Gere is in top form in the Wall Street thriller Arbitrage. Gere is a hedge fund magnate whose past indiscretions begin to pile up on him after the death of his mistress. Susan Sarandon and Tim Roth co-star.

In Toon: Tim Burton revisits the short film that started his career with the gothic stop-motion Frankenweenie. A young scientist attempts to bring his dog back to life and wreaks havoc on his town. Winona Ryder, Catherine O’Hara and Martin Short provide voices.

Under the Radar: Based on real events, Compliance is a disturbing drama about Sandra, a fast food manager who receives a call from someone claiming to be a cop investigating one of her employees. The voice instructs her to carry out increasingly invasive actions on the suspect.

The Idiotbox: Timothy Olyphant, one of America’s coolest actors, returns as U.S. Marshal Raylan Givens in “Justified:” Season 3. Inspired by the work of Elmore Leonard, “Justified” pits an old school cowboy against the modern crime world.

Julianne Moore is dead-on in “Game Change,” the story of how a virtually unknown governor of Alaska became an international media sensation when she was chosen as John McCain’s Hail Mary attempt for presidency in 2008. Woody Harrelson and Ed Harris co-star.

Don Cheadle and Kristen Bell star in “House of Lies:” Season 1. This pitch-black satire takes on corporate America with Cheadle in an atypical role as a wheeling-dealing management consultant.

Anjelica Huston and Debra Messing star in the Broadway drama “Smash:” Season 1. It’s full of music, dancing and backstage cattiness as an aspiring actress (Katharine McPhee) competes for the iconic role of Marilyn Monroe in a Broadway musical.

Everyone’s favorite prime time soap is back. “Dallas:” Season 1 brings back the original series stars (including the late Larry Hagman) along with a new generation as a battle rages for control of the Southfork family estate and the billion barrels of oil on it.

“Enlightened:” Season 1 stars the hilarious Laura Dern as an executive who suffered a nervous breakdown and just returned from a New Age retreat with a rosy outlook on life. However, she finds it’s difficult to think positive in the real world.

A husband and wife writing team think they’ve struck gold when they are brought to the U.S. to adapt their hit BBC show. When they meet their nightmarish star (Matt LeBlanc), he turns their show and personal lives upside down in “Episodes:” Seasons 1 & 2.

Blu Notes: The first feature-length “talkie,” The Jazz Singer, comes to Blu-ray in a stunning three-disc set in honor of Warner Bros.’ 90th Anniversary. Al Jolson stars as a singer who defies his rabbi father to follow his showbiz dreams. Included is a fascinating feature-length doc on the coming of sound, vintage shorts and more.