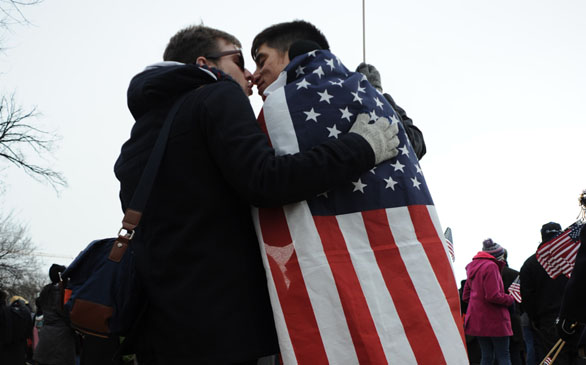 By equating the gay rights struggle with those of African-Americans and women, President Barack Obama in his inaugural address set a standard that thrilled gay activists and boosted their hopes that he soon will make a bold legal move to support a constitutional right to gay marriage.

Obama's words, themselves, were a landmark - the first time gay rights had ever been advocated in the high-profile speech. But the president, speaking just feet from Supreme Court justices who will take up the issue of gay marriage this spring, went far beyond a simple mention. He equated gay rights with the country's iconic civil rights movements.

"We, the people, declare today that the most evident of truths - that all of us are created equal - is the star that guides us still; just as it guided our forebears through Seneca Falls, and Selma, and Stonewall," he said, linking the first women's suffrage convention, the battle for black rights in the South and the gay protest against police harassment in New York - as equal steps in history's march toward equality.

"Our journey is not complete until our gay brothers and sisters are treated like anyone else under the law," he continued, "for if we are truly created equal, then surely the love we commit to one another must be equal as well."

The passage was "was definitely one of those moments that took your breath away," said Adam DeRosa, president of the Lesbian & Gay Band Association, whose 215 members later marched past the president in the inaugural parade. "We understand the historical significance of it. What political significance it has, remains to be seen."

Obama, who only last spring hesitated to declare his public support for gay marriage, soon will have to decide whether his administration will take the potentially huge step of arguing before the Supreme Court that gay marriage is an equal right under the Constitution.

The court will soon review two cases, one of them involving California's Proposition 8, the ballot measure that limited marriage to unions between a man and a woman. Gay rights lawyers have asked the Supreme Court to declare the ballot measure unconstitutional. If the administration were to side with them, it would be asking the court to strike down the laws of 41 states that do not allow same-sex marriage.

To several legal scholars, Obama's equating of Selma and Stonewall strongly implied he is prepared to take that step. But doing so would mark a sudden departure from the caution with which he has typically approached most issues.

Asked whether the speech was intended to send a signal about the Supreme Court case, a White House official, speaking on condition of anonymity to discuss internal deliberations, said: "It's a legitimate question, but for today, we're letting the president's speech stand on its own."

Theodore Olson, the former Bush administration solicitor general and lawyer for the gay couples challenging Proposition 8, said that the president sounded like he was ready to back a constitutional right to gay marriage.

Evan Wolfson, president and founder of New York-based Freedom to Marry, noted in an interview that Obama's speech "was an inaugural address, not a legal brief, and we will see over the next several weeks exactly what positions the Justice Department takes."

"I am confident the president knows that the Constitution requires equality in the freedom to marry," he added.

The excitement that Obama's remarks spurred among advocates of gay marriage was matched by dismay among its opponents. Byron Babione, senior counsel at Alliance Defending Freedom, which is co-counsel in the Proposition 8 case now before the Supreme Court, said it was "deeply dishonest to equate the civil rights movement to today's homosexual activism."

"Civil rights marchers were met with batons, fire hoses, tear gas, and nooses. So-called 'pride parades' are met with Fortune 500 corporate sponsorship," he said. "African-Americans were systematically dehumanized, while homosexual activists are lionized by every powerful cultural institution and center of wealth in America."

For most of his political career, Obama has supported gay rights but said he opposed same-sex marriage. In May, the president announced that he had "evolved" on the issue and that he now personally supports gay marriage. But he also said the matter should to be decided on a state-by-state basis.

"The country has shifted," said Dawn Moretz, 45, an elementary school teacher in Marshville, N.C., who was walking with a friend on the edge of the inaugural parade route Monday. Gay rights is "still a hot button issue, but its not as hush-hush as it used to be," she said.

The inaugural ceremonies reflected that shift. In addition to the lesbian and gay band that marched in the parade, officials chose a gay poet, Richard Blanco, to read at the celebration.

Such symbolism, however, would pale in comparison with a Supreme Court declaration on marriage. The justices have agreed to hear the two gay marriage cases in late March. Both pose questions about equal rights for same-sex couples.

In one case from New York, the justices will decide whether legally married gay couples are entitled to equal benefits under federal law. Obama's lawyers have joined with gay rights advocates in that case.

The second stems from Proposition 8. U.S. District Court Judge Vaughn Walker overturned Proposition 8 in 2010, ruling that it violated both the Due Process and Equal Protection clauses of Constitution. An appeals court affirmed the decision, and the Supreme Court decided in December to take the case.

(Jessica Garrison in Los Angeles and Brian Bennett in Washington also contributed to this story.)