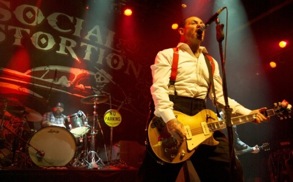 Social Distortion has really grown up in the second half of its career. It’s a much different pace for the band nowadays. They don’t come off as the chip on your shoulder So Cal punks that they grew up as. In fact, it hasn’t been about punk for them for quite some time now. For Social D, it all comes back to rock 'n' roll, rhythm 'n' blues and classic stories of hard times.

Recently the band has been keeping somewhat of a residency with the House of Blues in both Hollywood and Anaheim. Playing several shows a month, sometimes several in a week, the band has consistently sold out every performance with this local run. On Saturday evening, the band calmly took the stage amid a clamoring, packed house of anxious rock and roll die hards.

Opening with two classics, “Through These Eyes” and “Bad Luck,” the house exploded with energy. As the set went on, however, Social Distortion slowed the energy down and defied the common expectations of what their show normally entails. The band has a different story to tell these days. As always, the energy is led by their embattled front man, Mike Ness.

Ness is an intriguing character to watch on stage. His performance draws from a very emotional place. After 35 years in the music business, he’s the only remaining, original member in his band. He’s faced failure, incarceration, loss, and despite his many tragedies, success. He seems wise and still - tired. He bears the long, heavy expression of a man who has seen some shit, and he’s lost the sense of edginess that he carried with him in his younger years. And yet still, he wears his scars on his sleeves like trophies.

It’s an uncharacteristic vulnerability from a front man that we have always known to be somewhat of a hardened person. It shows with every painful grimace as he digs deep into the meaning of his hard luck lyrics. Through all the he has been through, the only thing that seems to have remained true to Ness is the music. And that’s what it’s all about nowadays; that’s the only thing that still matters.

The band really got the point across with a mid-set rendition of their classic song “Ball and Chain.” The version they played that night was slightly different than the bouncy rock anthem that is still heard on the radio. Rather, this live version was slowed down significantly. It was a tempo that let you really annunciate the lyrics as you sang along.

It was a little bit slow for the band to really nail; it sounded slightly messy. Ness seemed to be the only one who could handle change in tempo. He was one of the few people between the band and the audience that actually seemed to understand the point of slowing that song down. It’s meant to be a slow song. It’s meant to sound like being hurt. That’s what singing the blues is all about.

The set felt very much like an old-fashioned rock 'n' roll show as it began to wind down. Lengthy guitar solos and harmonica jams seemed to perturb the more sweaty and spastic Social D fans that came out looking for some punk rock they could make a pit with. But that’s not what the show was about. That’s why they chose to close the set with the mellower rock song, “Still Alive” and why energetic songs like “Don’t Drag Me Down” were left out.

The encore was a very appropriate ending for the show as the band went through two covers of Johnny Cash songs. The much-anticipated show closer, “Ring of Fire,” was preceded by a high-energy rendition of “Folsom Prison Blues.” The crowd had no doubt expected the cover of “Ring of Fire,” especially when Ness admitted to everyone that he just felt “like playing some Johnny Cash.” But the “Folsom Prison Blues” cover was an unexpected treat for an eager crowd of fans that have been devoted to Social D for years.

The house was filled with older fans and younger fans alike who have rallied around this Southern California band during its most recent run of hometown shows. The band seems like they are right at home with this pattern of playing consistently to a regional audience. The House of Blues has extended this run to include dates in San Diego as well as more in Anaheim and West Hollywood. Many of these shows that extend out into March are already sold out, but some tickets for certain dates are still available.

Overall, it’s an unique show with a classic band and most definitely recommended if you are even remotely on the fence about going.