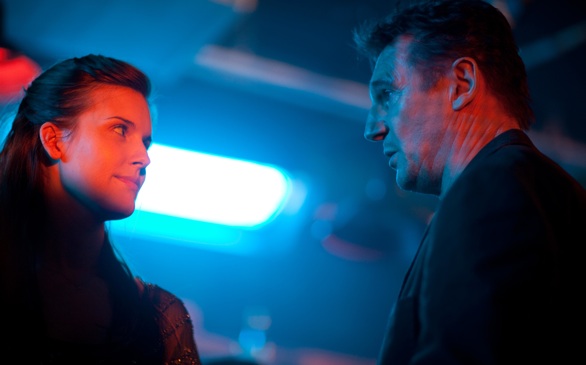 Maggie Grace and Liam Neeson are back in Taken 2.
(Credit: Magali Bragard)

Liam Neeson returns as ex-CIA operative Bryan Mills in Taken 2. The tables turn as the father of one of the villains from the first film takes Mills and his wife hostage. Now it’s Mills’s daughter’s turn to free her father and unleash his “particular set of skills.”

Funny Business: Woody Allen bids farewell to his European period with To Rome with Love, a light-as-air romantic farce set against the ancient beauty of the titular city. Alec Baldwin, Jesse Eisenberg and Ellen Page star.

The Horror! The Horror! An atmospheric ghost story in the gothic tradition, The Awakening stars Rebecca Hall who arrives at a boarding school to uncover the true cause of a boy’s death. But her clinical mind soon begins to falter as the school’s past comes to light.

Inspired by a real-life mystery, The Possession follows a married couple (Jeffrey Dean Morgan and Kyra Sedgwick) after their daughter finds an ominous antique box at a garage sale. Soon, the family begins to suspect that the box contains something evil.

In Toon: Adam Sandler leads a hilarious voice cast in the animated Hotel Transylvania. Dracula (Sandler) runs a hotel for monsters away from the human world and has invited all his friends for a monster bash. Then, a human boy crashes the party and falls for Dracula’s daughter.

The Idiotbox: “Men of a Certain Age:” Season 2 is the final season of Ray Romano’s excellent dramedy about three childhood friends (Romano, Scott Bakula and Andre Braugher) wrestling with middle age, their careers and relationships.

Ricky Gervais and Stephen Merchant (“The Office”) team with Willow himself, Warwick Davis, to take on celebrity reality shows in “Life’s Too Short:” Season 1. The mockumentary follows Davis, a little person trying to cash in on his onetime celebrity to get out of a financial jam.

Stranger Than Fiction: One of the best films of the year, Searching for Sugar Man is the incredible story of Rodriguez, a singer-songwriter all but unknown in the U.S. since his debut album bombed in 1967. He’s been living in poverty ever since, not knowing that he was a superstar and cultural icon in South Africa.

The Imposter is a riveting real-life story about a boy from Texas who went missing only to reappear in Spain several years later. But when the boy’s family takes him home, inconsistencies in his story begin to pile up.

Blu Notes: The last film by surrealist master Luis Buñuel, That Obscure Object of Desire is a fitting swan song. Two actresses portray the different sides of the same woman in a tale of romantic obsession and frustration.?

Two Woody Allen classics come to Blu-ray. Diane Keaton began her fruitful collaboration with the director in Sleeper, Allen’s hilarious slapstick sci-fi satire. One of the auteur’s best films, Hannah and Her Sisters is a sophisticated dramedy and ensemble character piece led by Mia Farrow.

If you’re missing BBC’s “Sherlock,” check out the ‘70s classic The Seven-per-cent Solution, a jaunty Holmes tale in which the cocaine-addicted Great Detective teams with Sigmund Freud to solve a kidnapping.