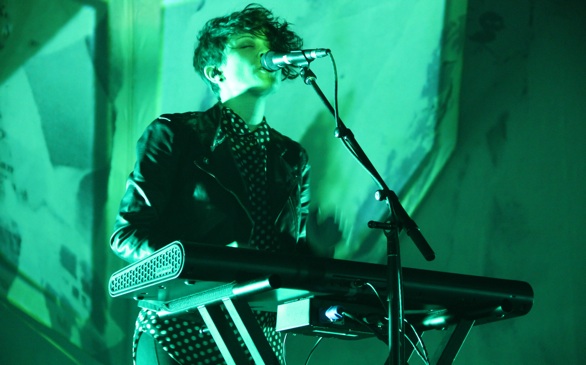 Tegan sang her heart out at the Club Nokia show.
(Credit: Amanda D'Egidio)

The newly revamped Tegan and Sara brought a sold-out show to Club Nokia on Friday, Feb. 1.  With their new dance-ish electro pop album Heartthrob releasing a few days prior, these twins gave the crowd a bit of their new style to feel in their bones.

Sara was sporting wolf-patterned leggings while Tegan kept it simple donning a polka-dot blouse and leather jacket. From old songs off The Con to their new upbeat pop jams, they definitely kept the crowd on their toes and guessing what would come next.

The duo kept to the normalities of their old shows, with banter in between songs and connecting with their audience through some good old story time. Tegan wanted everyone to sing along to “Where Does the Good Go?” so she said, “Imagine something traumatizing… like for instance when I had a boyfriend, traumatizing enough (giggles), and on Valentine’s Day, he gave me a rose and threw $7 on my desk. I was so embarrassed because everyone saw what he did.  Who would have thought I would be up here in front of everyone singing now? I always think about this time and the $7.”

The crowd laughed and began to sing out “Look me in the eyes, and tell me you don’t find me attractive/Look me in the heart, and tell me you won’t go.” The unity among the fans at Tegan and Sara shows is really unlike anything else; everyone relates to the duo in different ways and develops a bond with the girls.

Being that Sara is usually the one of little words, during the song “Not Tonight” she told the audience, quite seductively, “Let me just make eye contact with you, and pretend like I’m serenading you.”

The crowd definitely liked that one, especially when she added a short cover of “I’m on Fire” by Bruce Springsteen in the middle of the song. It was quite rare for the duo to do a cover and being that this is supposedly Sara’s favorite song, it made this performance a memorable one.

While Tegan and Sara were either jamming out on the keyboard or on guitar, or singing their folkey hearts out, they were backed up by the four other band mates. Together they made the rhythm and beats cause some “Alligator Tears,” and the soft, delicate vocals made everyone go back to the “Nineteen” state of mind.

Right before “Drive Me Wild,” Tegan tried to get everyone pumped up by saying, “Put your hands up like this [fist pump position]. It feels like we are in the ‘80s, like at a Bon Jovi show,” and she continued to do it with the crowd.

Along with most of the songs, the fans sang along and danced passionately to the assortment of tracks. On the slower ones, people put their arms around each other and sang their guts out. The connection between everyone was just so intimate, and Club Nokia filled with great energy. Closing the show with “Feel it in My Bones” made the crowd go out of control.

If you want to join the posse of die-hard Tegan and Sara fans, make sure you check out Tegan and Sara’s newest ablum, Heartthrob.