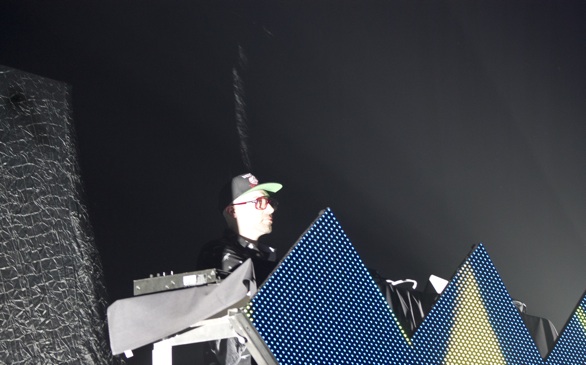 Since diving into the world of electronic dance music more than two years ago, Alex Botwin hasn’t taken his foot off the gas pedal.

The Colorado-based producer has released two EPs and more than a handful of remixes under his Paper Diamond moniker, and now he’s working on his next studio effort — entitled Paragon — that will drop later this year.

“Music is kind of a timestamp for me,” Botwin said on Saturday, hours before taking the stage at Club Nokia as one of two openers on dubstep heavyweight Excision’s “Execution Tour.”

But talk to Alex B. (his nickname in EDM circles) for more than a minute, and he’ll also admit how much he loves writing new material. It’s why he went down to New Orleans last year to work with famed hip-hop producer Mannie Fresh and recently decided to collaborate with Big Boi of Outkast in Atlanta.

“There’s a lot of stuff in the works,” he continued. “I found that when working with MCs and singers, it can take a lot of time to get things really into place.”

With that in mind, Botwin “rebuilt” Paragon into what he believes better represents his current take on music, and he couldn’t be more eager for his fans to hear it.

If it’s at all like what he played on Saturday night in L.A., you can expect there to be a lot more dubstep featured than before.

Of course, these weren’t your typical Paper Diamond fans with tank tops and fist pumps dominating the dance floor, but Botwin still played to the crowd during his 60-minute set as he threw a whole host of new tracks at his muscly audience.

The response, subsequently, couldn’t have been more positive. It didn’t matter if Excision fans hadn’t heard of Paper Diamond or weren’t familiar with his work. Rather, they embraced Botwin just as they had Vaski, the veteran producer hailing from Minneapolis who kicked the night off with his own brand of dubstep.

It didn’t hurt that Botwin had one of the best sound systems (PK) at his disposal too, but to see him receive a bevy of applause in a tough EDM market was impressive nevertheless.

“I think musically I’m just training my ear more to know what works better on these sound systems,” Botwin said. “You start playing these bigger rooms, and everything needs to be viewed differently.”

The same can be said for how Botwin has approached his own record label/design firm/retail store, ELM & OAK, which he continues to manage from a distance while he focuses on finishing Paragon.

“ELM & OAK is a grassroots company, and we’re just building it from the ground up so everything is slow and steady,” he said. “My goal right now is to write the best album that I can.”

From there, it may only take a couple more albums before Botwin swings for the fences, which means turning his Paper Diamond project into a live band. At this point though, he’s not thinking that far ahead.

“I’m not even at that stage,” he confessed.

With the way Botwin’s career has taken off, it may not be long before he is.