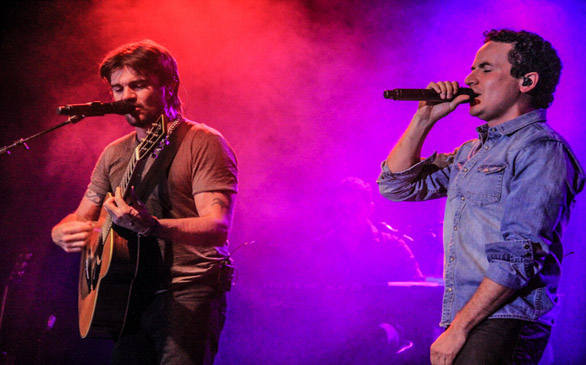 Juanes needs no introduction, and he didn’t use one Monday night at Los Angeles’ El Rey Theatre for his much-awaited Metro PCS & ZTE sponsored private concert that included about 600 lucky fans.

Dressed in fitted black jeans, black suede boots and a black denim jacket, the Colombia-born singer-songwriter hit the stage more humble than ever before – he appeared almost surprised as everyone loudly cheered and applauded for him.

That was the kind of night Juanes provided his audience, which featured Colombians, Mexicans, Americans and Central Americans, to name a few. The passionate and ever-powerful Juanes started with “Fíjate Bien” (Focus), an up-tempo track igniting much movement from the crowd. They loved it, but I loved it even more because it’s his first single (released in January 2001), as a solo artist. And of late, he’s managed to feature it as part of his live performances.

Juanes, who didn’t sport a full band, proceeded with additional upbeat songs, including “La Camisa Negra” (The Black Shirt), which is accompanied by an acoustic guitar – there’s never been anything more marvelously satisfying. You hear it, you feel free. You dance it, you gain joy. You sing it, you become a part of it. Colombian singer-songwriter Octavio Mesa’s lyrics leave a mark on one’s soul; it’s really an astonishing tune when witnessing live.

Interestingly enough, one of Juanes’ grandest gestures arrived when paying tribute to a Jamaica legend, Bob Marley. Juanes delivered his own original interpretation of “Could You Be Loved.” With it, his vocals and guitar playing were heartfelt.

But there was a romantic turn during the night. When he sang “Nada Valgo Sin Tu Amor” (“I’m Worthless Without Your Love”) and “Fotografía” (“Photograph”), it seemed to be the ideal moment to reach for your loved one’s hand and tell him/her how much love you them. This is what Juanes’ music is all about; it creates instances like that.

Nevertheless, the 19-time Latin GRAMMY and two-time GRAMMY award winner, who’ll be back in L.A. on May 25 at Nokia Theatre L.A. Live as part of his “Loud and Unplugged Tour,” saved his best for last: “Yerbatero” (Herbalist), “Gotas De Agua Dulce” (Drops of Fresh Water) and “Me Enamora” (It Makes Me Fall In Love).

Before closing his intimate show with “Me Enamora,” Juanes shared the stage with Colombian singer-songwriter Fonseca. Together, they produced one of the most memorable live collaborations of all time, performing “Gotas De Agua Dulce,” a song utilized by both to serenade the women in attendance. It was impressive.