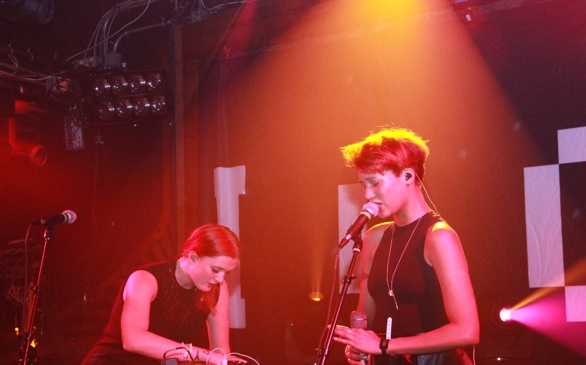 The crowd at the Troubadour on Saturday night was ready to have a dance party with Icona Pop. The Swedish pop DJ duo, Aino Jawo and Caroline Hjelt, came on stage full of energy and strutted their stylish demeanor.

With her jet-black short hair, Jawo was rocking an oversized blazer and skater skirt, while the auburn haired, Hjelt, had on a big black fur vest and spiked blouse.

A great number of spunky girls eager to dance around and sing along filled the Troubadour. The venue was turned into a nightclub, with a dimly lit stage and lights going along with the beats. With their music full of synths and drumbeats, Icona Pop’s voices lingered throughout the venue.

The show was sort of this ongoing endless set with few words spoken to the audience, making it seem even more like a club. To the crowd’s surprise, the two even sang a cover of "It's My Party" by Lesley Gore.

The closer, of course, was the infamous and popular "I Love It."  The crowd went absolutely wild. With smiles on everyone’s face, it was as if everyone was given multiple shots of caffeine and never wanted the song to end.  Everyone had their hands in the air, jumping and singing along: "You're on a different road/I'm in the Milky Way, you want me down on earth, but I am up in space/You're so damn hard to please, we gotta kill this switch/you're from the ‘70s, but I'm a 90's b*tch/I don't care, I love it. I don't care, I love it, I love it." By the end of this song, half of the crowd had paraded onto the main stage.

Jawo and Hjelt are said to have met at a party about four years ago in Stockholm, Sweden.  From there, they started the band the very next day.  When they felt the need to get even more inspiration, they moved and continued their career in London.

After the release of the single "Manners" off the 2011 Nights Like This EP, the girls began to get a lot of international attention.  After that, in late 2012, they released The Iconic EP with the hit single "I Love It," featuring Charli XCX.  The song was also featured on the HBO show, “Girls.”  The coolness and "swag" that these two ladies possess brought, and continues to bring, attention to their powerful dance music.