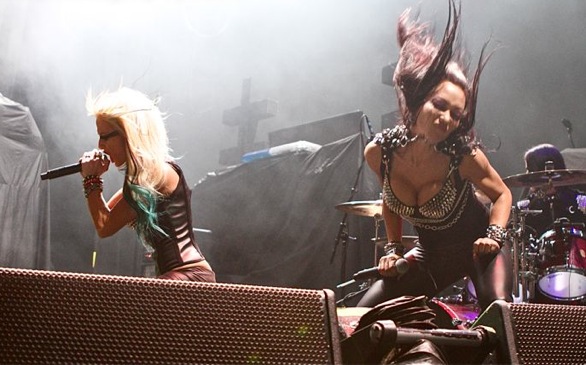 Metal is something that has evolved to the point of saturation in the market. After the demise of Pantera, the scene hasn’t been the same. Hundreds of bands try to go harder and faster in the hopes of making themselves stand out. However, very few have been able to break away from the mold of what they think works. But now there’s a new contender: Butcher Babies.

This is an act that started out doing covers of hardcore punk and metal songs in Hollywood. They were banded as a novelty act with mostly naked girls belting out classics while they poured whiskey on the crowd and people dressed as slaves on stage. From that, a legitimate act was born and they have been on tour with legend Marilyn Manson for most of the winter.

Two beautiful women (Carla Harvey and Heidi Shepherd) front the more refined act, and they will shock listeners with their unabashed sense of music and tone. They control the stage with growls that make most male-fronted metal bands sound like little girls. Their lyrics are brutal and push the limits of good taste, but that’s exactly what you want in a metal band. Running from side to side and reaching out to the crowd, they fired up not only the girls in the crowd, but the guys as well.

The band backing up the two ladies were as solid as it gets. Dressed in black and with matching face paint, the drummer and bassist put together a groove that pulled the crowd in. Metal can sometimes be void of rhythm, but this was not the case at all. Once they started, heads were moving and then the bodies started to get going. By the end of the second song, the whole venue was participating. Guitar wise, the songs follow a pretty standard metal sound with a deep groove and set up the girls to be the true stars of the show.

Skeptics have put this band in a place reserved for novelty acts, and part of that is because the girls fronting the band are perfect 10s. That kind of thinking was shattered by the time they finished the show, because you could hear they put every ounce of their souls into each song. You can’t go on stage with that kind of sound and not be noticed.

Their new CD is about to get underway and they just got signed to one of the most respected metal labels out there, Century Records. Expect to hear a lot more about the Butcher Babies, and if you are a man or woman with a pulse, go catch them live!