Coheed and Cambria: Feb. 22 @ The Wiltern 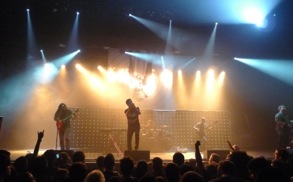 With a line that stretched well around the entire building and an army of black-shirted fans selling out the Wiltern’s large theater with ease, Coheed and Cambria's popularity certainly spoke for itself. Whatever genre the band fills, whether it be metal or fantasy-tinged progressive rock, Coheed and Cambria has developed a large cult following since their inception in the early 2000s.

The hot-ticket show had two tricks up its sleeve with some substantial openers: Russian Circles and Between The Buried and Me. Russian Circles were tremendously heavy, producing an incredible amount of sound out of just three members. Their fully instrumental set was devoid of any lyrics or singing, allowing the trio to really let loose on stage. If the roaring applause was any indication, Russian Circles really made a name for themselves.

With nearly as impressive of a following as Coheed and Cambria, metal titans Between The Buried and Me took to the stage to the crowd’s rabid enthusiasm. Their highly technical blend of progressive metal was significantly louder than Russian Circles, a sound bolstered by front man Tommy Giles Rogers who incomprehensibly screamed vocals. But this is a metal band, so we’re cool with that. BTBAM is one of a handful of acts with the ability to switch styles quickly and seamlessly, blending brutality and beauty into any number of 5-plus minute songs. They played tracks from their latest release The Parallax II: Future Sequence along with many others of their 10-plus year discography, culminating in the insane guitar work of “Selkies: The Endless Obsession.”

But most in attendance were only here for one band in particular: Coheed and Cambria. The rock group has gained a massive fan base over the years from its music and mythos. All the band’s albums are concept albums telling a science fiction storyline called The Amory Wars, written by lead singer/guitarist Claudio Sanchez.

Rocking his neo-troll haircut, Sanchez and company took to the stage set against a strange set of mannequins and lasers as their fans sung along to nearly every word of the hour-plus set. Appropriate science fiction visuals, showcasing art from their line of Coheed-inspired comic books and novels, framed the band on stage. Sanchez’s high-pitched voice proved nearly as polarizing as Giles Rogers’ screaming, but at least it gave the fans something to sing along to.

The band’s polarizing nature stands as a blessing or a curse depending on what side of the fence you’re on. If you buy into the fantasy world that Coheed and Cambria have created for themselves, it’s hard to be disappointed. Even without that, the band’s music is incredibly unique in a genre dominated by convention.

Regardless, I have no doubts that the band will continue to sell out its shows with relative ease as its fan base continues to grow.