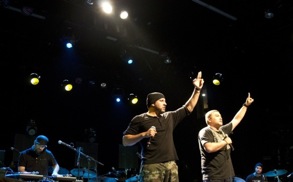 Northern California’s alternative hip-hop movement has come a long way since its inception in the mid-1990s. With once-underground emcees such as Gift of Gab and Del the Funky Homosapien paving the way, Bay Area hip-hop ascended into the mainstream as supergroups like Zion I, Blackalicious and Deltron 3030 emerged onto the scene.

But among those pioneers was also Latyrx, which featured the partnership of Lateef the Truthspeaker and Lyrics Born from their days working at UC Davis under the hip-hop label Solesides.

Long known for its experimentation with tone and flow, the duo has built a loyal following thanks in part to its early collaborations with DJ Shadow and Chief Xcel.

And even though it has been more than 16 years since it released a full-length album, Latyrx still drew more than a few hundred people into the El Rey as the opener for New Orleans funk ensemble Galactic. If there were any doubts that Bay Area hip-hop’s time had already come and gone, you wouldn’t have known it from the way spectators bobbed their heads to Lateef and Lyrics Born's rhymes.

Making an impact on an audience with only 45 minutes to spare can be a difficult task for any artist to achieve, but Latyrx did its best to work the crowd and give fans a taste of The Second Album. In a day and age where gangsta rap dominates the airwaves, the duo’s unique brand of hip-hop was a refreshing reminder that the genre still has some semblance of novelty left.

By the time Galactic stepped onto the stage, most of the room was filled from the front to the back. The Big Easy’s critically acclaimed sextet has made a point of playing at the historic art deco theatre every year. But this time, it was a little different.

Accompanying them on this tour is Corey Glover, the feverishly flamboyant lead singer of funk metal outfit Living Colour. And while Galactic has rotated between front men ever since Theryl “Houseman” DeClouet quit the band in 2004, it may have found the perfect replacement in Glover.

A cover of “Cult of Personality” was undoubtedly one of the biggest highlights of the night. The 1988 hit thrust Living Colour into the spotlight with a Grammy award for "Best Hard Rock Performance."

Yet, Glover didn’t take a step back when it came time to rehash some of Galactic’s older material and dig into a few of its latest tunes. Donning an argyle sweater and a baseball cap over a bleached head of hair, the Brooklyn native demonstrated an impressive vocal range even at the age of 48.

Glover, of course, wouldn’t be the only one to man the microphone during a performance that lasted well over two hours. As it often does with opening acts, Galactic invited Latyrx back out onto the stage to perform a couple songs from the band’s hip-hop inspired album, From the Corner to the Block — and that really got the dance floor shaking.

When it came down to it though, it was covers of the Beatles’ “I Am the Walrus” and the Rolling Stones’ “Sympathy for the Devil” that were particularly astonishing to hear from a group that has long made its name in funk and jazz circles and amongst jam bands.

No matter how much Galactic has evolved in 20 years, it still has plenty of tricks up its sleeve to keep you coming back for more and more.