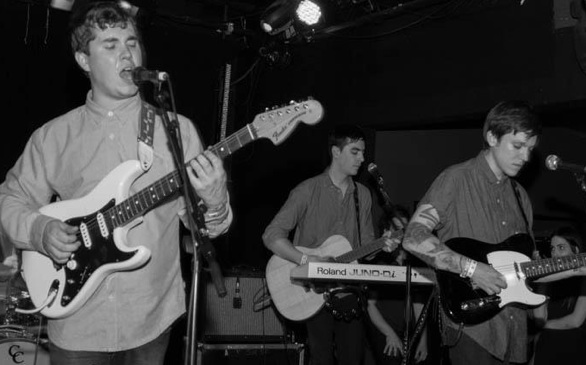 Last Friday, Warner Brother’s new darlings Surfer Blood performed to a sold-out show at Echo in Los Angeles. The Florida band rocked the venue with their Pixies-inspired surf punk. Their sound is fresh and inviting, but it’s clear they’ve yet to hone their skill to perfection.

There was a huge line anticipating Surfer Blood’s performance prior to the show, and the Echo was full by the time they went on at 10:30 p.m. The crowd was mostly in their late 20s and early 30s and seemed to be well aware of this new group that music outlets have been raving about.

The beginning of Surfer Blood’s set was stiff. Listening to “Demon Dance” and “Say Yes to Me” was nice; these were indie-pop songs you could bob your head up and down to, and that was precisely what the crowd did (in retrospect, it makes sense they save their rowdy hits for later).

Although the band hit every note, they seemed to focus on not making any mistakes rather than enjoying the crowd and their performance. There was no special lighting, no surprising costumes or make up – just some guys playing some good rock.

During the last bits of the laid-back “Floating Vibes,” they finally hit their stride, catapulting into an extended jam with guitarist Thomas Fekete’s driving power-chords and drummer Tyler Schwarz’s striking cymbals.

A mosh-pit broke out during the performance of “Swim,” the band’s hit single. Unfortunately, just as it came, it went. Suddenly, a number of people began bleeding into the patio for a cigarette, commenting to one another.

“I guess it is alright, I mean they could be better. They’re definitely not the worst, ” said one person.

One of the highlights was watching singer John Paul Pitts (in his nerdy college kid charm) perform “Weird Shapes.” During this song, his voice quivered and rose in pitch, in a similar manner to Frank Black.

The band, originally called Jabroni Sandwich, performed most of the music from their latest album Pythons and a few from their debut, Astro Coast. Sometimes it was more surf pop, and other times it almost sounded like southern punk. Either way, the band’s music is good enough to be the soundtrack for a film like Rushmore.

However, their live performances need a bit more honing before they can distinguish themselves as a reckoning force in the music world.