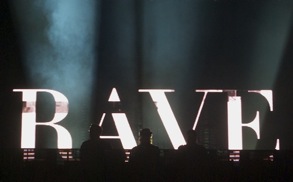 Remember Swedish House Mafia? Or is it too soon for that? Either way, if you weren’t there at the Los Angeles Historic Park this weekend, you missed your chance to see the group perform in California…ever again. You can still see them if you hurry over to Miami by the end of the month, but after that, the landmark EDM act is going to hang up its headphones and move on to other things.

Swedish House’s farewell show this weekend was an endearing spectacle for the throngs of teeming electro fans that showed up to party, rain or shine. Braving the mud, the traffic and the lack of parking, all of Chinatown was consumed on Friday and Saturday by brightly colored and often scantily clad ravers. Keeping in theme with the event’s title, Masquerade Motel, costumes and masks were a norm among attendees, even though the event still fell short of being anything close to a costume party.

More than just a quick, relatively inexpensive, off-season electro festival, Masquerade Motel represented something much bigger, especially for the more veteran Swedish House and house music fans. This tour, and this show, for many people marks the end of an era. In a sub genre that is quickly losing its traction as the most popular manifestation of EDM on the market, Swedish House Mafia was one of house music’s most seminal acts.

House is never going to be as big as it has been in the last 10 years, and the three DJ’s that make up Swedish House Mafia are wise to cash in their chips while they still have the chance to leave an impressive legacy. From the look and impact of the show they put on this weekend, SHM has set out to do exactly that.

The show opened on Friday night with impeccable timing, right at 10 p.m. The house lights went dark, and a massive curtain covering the stage illuminated with visuals to the sound of a cannoning bass. In a climactic buildup, all three of the group members appeared in silhouette to finally take to their tables and get their set going. Between the massive sound, the clamoring crowd and the towering, three-story, multi-dimensional visual screen and DJ booth, the resulting experience was something otherworldly.

At a Swedish House performance, the visuals serve to be the centerpiece of the performance. It is a high-budget, high-tech experience that is as unique as it is entertaining. The massive structure used for Masquerade Motel is reminiscent of the massive light shows used for a variety of different DJ’s from Shadow to Tiesto. SHM’s stage setup this weekend was not only massive, but it was also interesting. Executed with a great deal of creativity and a focus on highlighting the band’s futuristic brand name, the visuals for this show were enough to keep you stimulated for days.

Despite the fact that it was an impressive performance, the show on Friday night was not without its fair share of holes. For one thing, whoever thought it was a good idea to plan an outdoor festival, in a dirt venue in the middle of March, seriously needs to have their head examined. The rain turned the whole venue into a muddy slop fest with slip hazards and no shelter from precipitation.

During SHM’s performance, there were a few little hiccups that seemed to slow down the show considerably. A poorly rigged curtain failed to completely drop during the first half of the set, stopping the music and blowing what would have otherwise been a highlight of the set.

Then there was the point, halfway through the set, where the music again stopped, and the group led the crowd in an interactive panoramic photo. To participate, you had to download the app, and most people there that night did not have the kind of clear mindset it takes to enjoy that sort of thing. While well intended, the attraction stopped the show dead in its tracks and left a lot of people in the crowd waiting.

It’s hard to pick up momentum after that big of a showstopper. The second half of the set definitely declined in energy from both the crowd and the group on stage. Towards the end of the set, the crowd was brought back with the help of some fireworks and additional pyrotechnics. By the time the show ended, the crowd was entranced again, badgering the band for just one more song.

Swedish House took their time to thank the crowd and bid their fans farewell. It was a deserving departure for a group that many music fans are going to remember for a long time.

As the house lights went up, and the stage fell silent, a list of credits scrolled across the giant screens on stage, thanking all those who had contributed to this act over the years.

In a quiet afterglow, the stage vacated, and the crowd split up. The rain clouds had parted overhead.

After a second performance on Saturday night, Swedish House Mafia packed up its gear and is now headed for the East Coast where they’ll play two more shows and then, throw in the towel.