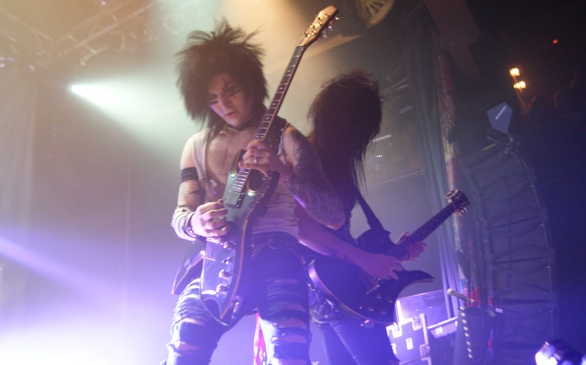 The Black Veil Brides can be classified as "glam metal," a subgenre of hard rock and heavy metal.
(Credit: Sabina Ibarra)

Last Saturday, the Black Veil Brides closed out their U.S. leg of their tour at the House of Blues on Sunset. Fans flocked to the show in their dark glam/goth best with war paint on their faces to emulate their idols. Their excitement was strong enough to wake the dead.

It was an all-ages crowd with most fans being pretty underage as the purple 21-and-over wristbands were very outnumbered by the green wristbands. No matter the age, the crowd was very enthusiastic and went nuts over the mere mention of their favorite band.

Now, the Black Veil Brides are a relatively new rock outfit that has reached mainstream success in the past couple of years. Their music reaches out to the outcast and misfit crowd. No, they’re not “emo;” they’re a “glam metal” group inspired by KISS and Alice Cooper. Their music encourages the underdog to overcome obstacles.

When the band took the stage that night, you knew you were in the “Church of The Wild Ones” (which is the name of the tour). After all, Hollywood is the band’s birthplace, and it was as if the heroes had returned home.

When lead singer Andy Biersack and the band performed the opening number “I Am Bulletproof,” the crowd went wild. And if things weren’t already crazy, the passion reached a fever pitch when Ashley Purdy (bass/vocals) joined in along with the rest of the band. Jake Pitts (lead guitar), Jinxx (rhythm guitar) and CC (drums) were forces that complemented the vocalists.

The band took their audience to battle through a selection of old tracks as well as new ones and even a cover of Billy Idol’s “Rebel Yell,” which the entire house joined in on. The place literally shook as everyone yelled “More! More! More!”

Overall, the show felt like a religious experience. The band reached the congregation of their fans with intense dedication through song after song, making the final show of their tour the best one yet.