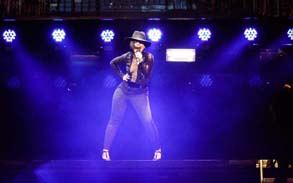 American R&B singer-songwriter Alicia Keys made her way to Staples Center Tuesday night, bringing her much-awaited “Set the World on Fire” tour to the City of Angels. And it re-depicted that she’s obviously, without a doubt, on another level of singing and performing.

The sold-out show also featured the rapidly rising singing sensation Miguel as the opening act and, to a delightful surprise, the special guest appearance of rapper Kendrick Lamar.

Alicia Keys has it all: the voice, the looks, the fashion, the dance moves and the sexy swag, among other assets.

She appeared atop of the stage in all black, including a compelling large hat. The fans all round kept talking about her wardrobe, which showed off her voluptuous figure. The sultry way she simultaneously walked and sang – sexy!

The songstress grabbed the public’s instant attention with “Un-thinkable (I’m Ready)” that came along with a sensual yet masculine touch when her apparent significant other (made up for this routine) silently sat on a chair. While Alicia Keys’ vocals pleased, the interpretive dancer captured the eyes of the ladies.

Alicia Keys performed fresh tracks and classic hits, too. “Fallin’,” for example, took us back to her beginnings remembering her early life as an artist and also our lives at that time. Her piano-playing scene needs no description; it was musically prolific.

Among others performed were “Girl On Fire,” “Like You’ll Never See Me Again,” “Karma,” “Listen to Your Heart,” “A Woman’s Worth” and “New Day.”

Alicia Keys’ near two-hour performance came to a close with her encore in “Empire State of Mind.” Displayed on a gigantic screen, Jay-Z rapped the opening verse in style. Surprisingly, believe it or not, that was effective and efficient since it got the fans going. Alicia Keys soon entered, and she awed in her glamorously, long-fitted purple dress.

“In New Yorkkkkkk,” she sang as the melody progressed. She went out in style.

The beyond energetic, charismatic and talented Miguel, 27, stole the audience’s heart. Miguel delivered a jaw-dropping performance, and people immediately fell in love with him, his music, his looks, his style, his swag and, of course, his voice.

I, for one, knew most of that already. Interestingly enough, however, I was particularly impressed with Miguel’s dancing. In fact, I was shocked as to how well this dude moves on the floor while entertaining a large crowd. When executing his dance moves, Miguel primarily reminded me of a mixture between Michael Jackson and James Brown.

The six-time GRAMMY-award nominated artist, who is a native of San Pedro, finished his 45-minute set with “Adorn,” a tune everyone thrillingly cheered for.

To the surprise of many, if not everyone, Compton-born and raised 25-year-old rapper Kendrick Lamar appeared on stage dressed in all white clothing: shirt, pants and shoes.

As Alicia Keys was singing Janet Jackson’s “Any Time, Any Place,” the beat to “Poetic Justice” was played. Kendrick Lamar immediately walked up to the stage and took over for the next few minutes. The crowd roared for his special guest appearance, which ended after he performed “Swimming Pools (Drank).”

That was, by far, the most electrifying two-song set ever!