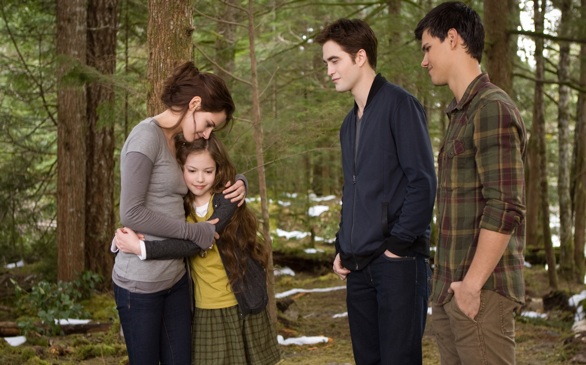 The Majors: The conclusion to a true pop culture phenomenon, Twilight: Breaking Dawn Part 2 finds the birth of Bella and Edward’s child threatening a war between the Cullens and the Volturi. Part 1 is also now available in a new extended edition, which restores eight minutes of footage. An extensive documentary takes you behind the scenes of the back-to-back filming of both films.

Poetic director Ang Lee is the perfect match to bring Yann Martel’s modern-classic novel, Life of Pi, to the screen. Lee garnered an Oscar for this story of a young Indian man who survives a shipwreck only to discover he’s trapped on a lifeboat with a Bengal tiger. It’s a sumptuous adventure and one of the year’s best.

A retired soccer star (Gerard Butler) hoping to reconnect with his son and ex-wife reluctantly becomes the boy’s soccer coach in Playing for Keeps. Now, he just has to fend off all the hot soccer moms. It’s a heartfelt romantic comedy with a star-studded cast, including Jessica Biel, Uma Thurman, Catherine Zeta-Jones and Dennis Quaid.

Easter & Passover Viewing: Making its Blu-ray debut, The Nativity Story tells the tale of a young Mary and Joseph struggling to survive during the harsh reign of Herod. The unlikely Catherine Hardwicke (Twilight) directs the fantastic Keisha Castle-Hughes (Whale Rider) as Mary.

Also new to Blu-ray, One Night with the King is full of lush period production design. It’s the story of a young Jewish girl (Tiffany DuPont) who becomes Esther, queen of Persia, savior of the Jewish nation. Peter O’Toole and Omar Sharif co-star.

Not your typical detective (or priest for that matter), Tom Bosley’s titular clergyman in “Father Dowling Mysteries” moonlights as an amateur sleuth. With the help of his streetwise nun sidekick, the priest-detective keeps his Chicago neighborhood safe.

Few films have captured the tragedy of the Holocaust like Steven Spielberg’s Schindler’s List. This 20th Anniversary Edition features a pristine high-definition remaster supervised by Spielberg, as well as a feature-length documentary that includes interviews with some of the survivors saved by Schindler.

Also available: master of the Biblical adaptation Cecil B. DeMille’s Samson and Delilah.

Under the Radar: Based on a true story, The Intouchables is a touching drama about a wealthy but eccentric French paraplegic and the impoverished ex-con he hires as a caretaker. The duo turns Paris upside down in its adventures as the two men come to appreciate each other.

Winner of a Special Jury Price at Sundance, Smashed stars Mary Elizabeth Winstead (Scott Pilgrim vs. the World) and Aaron Paul (“Breaking Bad”) as Kate and Charlie Hannah, an alcoholic married couple that struggles to stay together when Kate becomes determined to get sober. Winstead is revelatory while Paul is as magnetic as ever. Nick Offerman (“Parks & Recreation”) and Megan Mullally (“Will & Grace”) co-star.

Action! A remake of the ‘80s cult classic, Red Dawn stars Chris Hemsworth as the leader of a group of teenage freedom fighters who must defend their hometown when North Korea stages a surprise invasion. Josh Hutcherson (The Hunger Games) and Isabel Lucas (Immortals) co-star.

The Idiotbox: Scandinavian television is all the rage right now, and it’s no wonder; the region is producing some seriously good dramas. “Borgen:” Season 1 is a look inside the cutthroat world of Danish politics, following the fluke election of Denmark’s first female prime minister as she struggles to hold on to her ideals in the face of nonstop media scrutiny and boy’s club power plays.

Spinning off from the hit Lifetime movie, “The Client List:” Season 1 stars Jennifer Love Hewitt as a small-town single mother hit hard by the recession. She takes a job at a massage parlor only to discover that her job description includes a little more than massages.

Blu Notes: A underrated gem by the Coen Brothers, The Hudsucker Proxy comes to Blu-ray via the Warner Archives’ website. In keeping with the Coen M.O., it’s an off kilter take on a classic Hollywood genre—in this case, Depression-era screwball comedies. Tim Robbins is a dimwit mailroom clerk who is appointed head of a company as part of a stock scam cooked up by the board, led by Paul Newman.

Before The Lord of the Rings hit the big screen, there was Willow. A fantasy epic of high adventure, this ‘80s classic from director Ron Howard follows a short statured, would-be wizard (Warwick Davis) in his quest to protect an orphaned baby from an evil sorceress queen. Val Kilmer is terrific as the swashbuckling cad reluctantly allied with the unlikely hero.