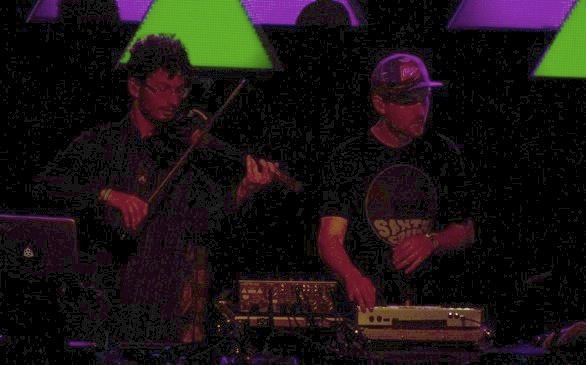 Angelinos familiar with Emancipator weren’t afraid to show up at the El Rey on Saturday night for its headlining performance.

Douglas Appling has created some buzz of late after releasing his fourth studio album Dusk to Dawn on his very own Loci Records, and it was validated by the line that stretched down the street from the historic art deco theatre.

Accompanied by violinist Ilya Goldberg, the Portland-based producer had a packed house come early to support opening acts Odesza and Little People. And despite not taking the stage until after midnight, Appling captivated a vivacious audience with his own brand of groove-based trip-hop and a unique lighting setup.

After warming up a crowd of mostly Burning Man types (this was a Do LaB event, after all), Emancipator picked up the pace midway through the show with some of its newest material, including the album’s silky self-titled track. As the night wore on, the duo only got better and better.

If there’s one knock on Appling’s work, it’s that one melody can blend into another without any indication of a beginning or end. But with a 90-minute set that lasted until almost 2 a.m., Emancipator didn’t have fans feeling cheated when they walked out at the end of the night.