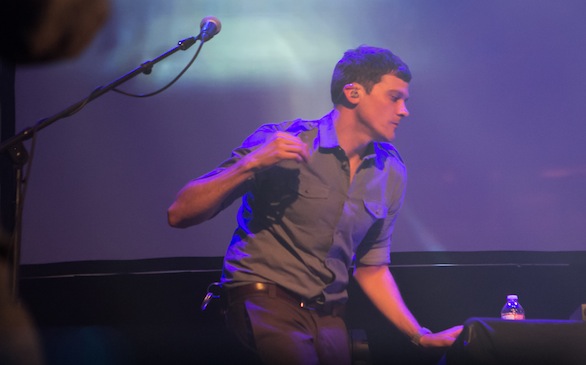 They tend to do this quite often. Bajofondo (consisting of Argentine and Uruguayan musicians) appear on stage with no introduction, the absence of bright lights, and their minds focused on a common goal: provide live entertainment.

Such instance took place Monday night at The Fond Theatre in Hollywood, where the neotango entity made a stop during their current tour in an effort to promote their new album, Presente. Argentine product Gustavo Santaolalla (composer, vocals, guitar) and Uruguayan Juan Campodónico (composer, DJ set, production) led the charge on what turned out to be an impeccably entertaining experience of music.

The group’s opening tune, “Código de Barra,” lit up the crowd from the beginning and it set the perfect mood for “Montserrat” and “Borges y Paraguay.” The 19-track set (depicted below) finished with “Perfume,” “Olvidate,” and “Los Tangueros.”

There’s no better way to describe Bajofondo’s show than to say it was amazing. Sporadically, singing and rapping happens. But one thing to keep in mind is that the band’s repertoire is based on pure sounds, dancing, and the eclectic VJ (executed by Verónica Loza) experience.