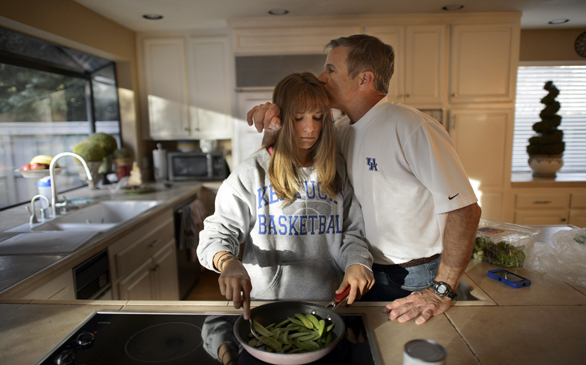 When Cassidy Myers moved back home last summer, the 24-year-old college graduate and her parents figured it'd be just a matter of weeks - three months, max - until she landed a new job.

Seven months later, despite dozens of job leads, numerous emailed resumes and plenty of parental encouragement, there was no job in sight.

Her parents despaired. So did Cassidy, who had worked two years for a San Diego nonprofit.

"Going from working 180 miles per hour every day to being home and going two miles an hour was a big adjustment. It was not easy," said the journalism major, whose job hunt focused on athletic companies, health/fitness firms and college sports programs.

For her parents, Jodie and Chuck Myers, there was another kind of tension.

"There's the ginormous, silent, burdensome, omnipresent elephant in the room: the money thing," Jodie Myers said in an email to The Sacramento Bee.

Like many baby boomer parents, the couple face financial stresses of their own - Jodie's part-time work as a court reporter has dried up, their home value has "tanked" and Chuck's education technology sales income is solid but unpredictable. Not to mention paying for their two daughters' Catholic high school educations and their out-of-state college tuitions.

The Myers' family situation isn't exactly news. In recent years, a lackluster job market has driven thousands of young adults - even "kids" in their 50s - back home to live with Mom and Dad. Between 2005 and 2011, the number of men ages 25 to 34 living with their parents increased from 14 percent to 19 percent, according to the U.S. Census Bureau. During that time, women in the same age bracket living at home increased from 8 percent to 10 percent. That's 4 million men and 2 million women back home with their parents.

"Many adult children are going to the 'Bank of Mom and Dad' for money for loans, to get them out of a hole or to get started. Or they're going to the 'Mom & Dad Extended Suites' (moving back home)," said Eleanor Blayney, consumer advocate for the Certified Financial Planner Board in Washington.

But these so-called "boomerang kids" are moving back as Mom and Dad are often facing financial setbacks of their own, from underwater mortgages to upended retirements to joblessness.

How do families tackle the emotional, financial and day-to-day realities of co-existing again under one roof? It's a delicate dance. Here are some tips:

First, parents have to accept that their children are not kids anymore, but adults in their own right. They can abide by parents' rules while living under their roof, but there will be far less tension if everyone treats one another as adults.

Bobbi Knapp, a retired nurse, has had both a son in his 20s and a daughter in her 30s move back for short periods while trying to reboot their careers.

Knapp says she learned one critical lesson: "They're adults. It's very different than when they were living here under (age) 18. They don't need my unsolicited advice just because I think I know better. If they need my advice, they'll ask."

GET IT IN WRITING

As awkward as it sounds, when adult children move home, financial experts recommend putting some guidelines on paper. Such as: how long they'll stay; what chores they'll help with; how much they'll contribute to monthly expenses (rent, food, etc.); how to share the computer, TV and family car; as well as touchy topics such as overnight friends, late-night hours, drinking and smoking.

"It is really important to sit down and put something in writing," said Christina Newberry, a Vancouver, Canada-based author and founder of AdultChildren LivingAtHome.com. "When families end up in conflict, it's not because anyone is trying to cause problems, but parents (can) end up feeling taken advantage of."

As part of her "Under One Roof" contract, Newberry also recommends an exit plan. Say, six months or "a reasonable amount of time" to finding a self-supporting job. Have some milestones laid out: so many interviews, returning to graduate school, part-time Starbucks job to get over the hump.

And one of Newberry's key points: Mom doesn't do laundry. "Anyone who has been to college or is 18 years old is capable of doing their own laundry. Anything else is enabling."

With Cassidy, the Myers family set some parameters. They would cover room and board, and because Cassidy couldn't qualify for a car loan without a job, her parents signed for a low-interest loan for a used Toyota. They cover the $100-a-month insurance; she pays the monthly $220 car payment from savings.

Everything else - salon haircuts, socializing with friends, attending sports games - is on Cassidy's dime.

Likewise, Knapp established house rules with her grown kids: No overnight guests. Take out the garbage. Put things away after you're done. Do the dishes or sweep the kitchen floor.

"It's not slavery," she says. "It's just participating as an adult living at home."

For many parents, the idea is ridiculous: charging your own kids rent? But financial experts say adult kids should contribute something, whether it's cash toward the family's monthly expenses or household help with chores, from grocery shopping to dinner cleanup.

"It's partly so they get in the routine of having monthly payments. But it's also beneficial for their self-esteem to feel they're contributing to the household," said Newberry.

Too often, adult children aren't aware of their financial impact. "They think it's free for their parents," she said, but don't recognize the added expense of food, electricity, insurance, not to mention postponements to home improvements, vacations or other expenses.

It they can't contribute cash, adult children can contribute their time, especially for jobs that parents otherwise might pay for, such as computer consulting, house painting, yardwork, car washing.

The parental desire to help kids financially is normal, but planners advise against giving too much. In the long run, parents could shortchange not only their own savings but their kids' financial independence.

"The problem for parents is that they can't - or do not want to - say 'no' to their children," said Blayney, "but financial help can come at the expense of (parents') own retirement or long-term security."

Whether it's credit card bills, student loans or a home mortgage, parents should consider their own financial picture first.

Parents paying off a child's credit card bill should be clear that it's a one-time bailout, not a regular handout, says the National Endowment for Financial Education. If it's a cash loan, parents should charge a small amount of interest, so adult kids understand how credit works. (And so they won't be easily motivated to ask again.)

Parents can help in other ways: Baby-sitting or pet-sitting while adult kids are on job interviews; connecting them with friends for job leads or part-time work; loaning the family car.

CALL IN A PRO

When parents offer money advice, it's not always welcome. "It is so much easier to take good financial advice from a professional than from Mom and Dad," said certified financial planner Blayney.

In her own practice, Blayney often invited clients to bring in their college-bound kids for a financial-advising session.

Invariably, kids "who seemed totally bored and inarticulate when their parents were in the room, would sit up straight and open up" once Mom and Dad were asked to leave.

Whether they've got a job or not, getting them to think about setting up savings, loan repayments and other financial goals can boost their long-term security.

Just when the Myers family lamented that the unemployed-at-home saga would never end, an unexpected phone call 10 days ago changed everything. After months of interview rounds, Cassidy got hired as a $20-an-hour "contract coordinator" at Nike's headquarters in Beaverton, Ore. It's only a six-month job, but it's a foot in the door. She starts this week.

An avid sports fan, Cassidy says working for the global sports retailer "is the only job I've ever wanted."

As for her elated mother, "It's like giving birth."

And it could be just in time for Round 2. The couple's younger daughter graduates from college in May. With student loans and no job lined up so far, she may be moving back home, too.

WHEN ADULT KIDS MOVE BACK HOME

According to a national survey of more than 1,000 U.S. parents and children ages 18 to 39, 40 percent of the young adults live (or recently lived) at home.

What parents help with:

Of adult kids living at home, 75 percent say they contribute to the household:

13 percent: Postpone major events, such as buying a home or taking vacations