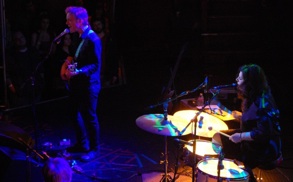 “If I could just make it stop / I’d tell the whole world / to get out of the way,” sang Mimi Parker under a mellow light. And it looked as though the whole world had stopped to the members of alt-rock veterans Low, leaving only these three musicians to communicate through their voices and instruments.

Other than a New Year’s-like countdown to the band’s overture, the Low-ly ones barely acknowledged the devoted audience. Vocalist and guitarist Alan Sparhawk would contort his face and close his eyes as he performed, only shooting caring visual cues to his wife on drums. Steve Garrington manned the bass and keyboards — the latter being at the forefront of the trio’s recent album, The Invisible Way.

Much of the serene set was culled from that release, from the anti-drug-war hymn “Plastic Cup” to the cautionary drone of “Clarence White.” Additionally, a few treads into the back catalog occurred, like the crunchy “Monkey” off 2005’s The Great Destroyer. It might not have been the most bang-for-your-buck concert, but with 20 years now behind its belts as a band, Low’s formula is a solid one.