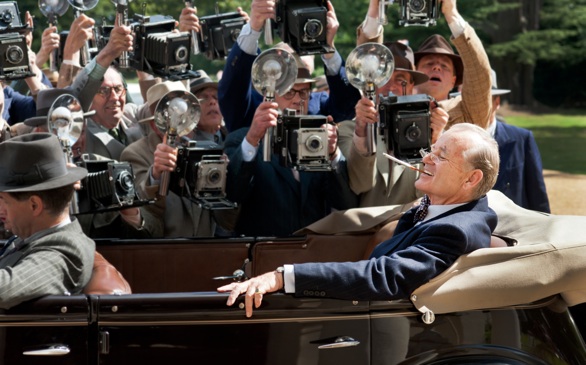 The Majors: Bill Murray embodies one of our great presidents, Franklin D. Roosevelt, in Hyde Park on Hudson. Set on the eve of WWII, it’s the true story of the first visit to America by a reigning British monarch. When the King and Queen pay a call to FDR at his country home, they discover a rather un-British domestic situation. Roger Michell (Notting Hill) directs the fine cast, which includes Laura Linney and Olivia Williams.

Under the Radar: A group of strangers are assembled in a bar only to discover that they all share the same ex-girlfriend in Sexy Evil Genius. Unfortunately for them, their former lover, Nikki, is criminally insane and out for revenge. This original dark comedy features a stellar ensemble cast, including “Buffy” alumni Seth Green and Michelle Trachtenberg, and William Baldwin.

The Idiotbox: A legendary romance comes to life in the HBO film Hemingway & Gellhorn. Set during the Spanish Civil War, the film follows Ernest Hemingway (Clive Owen) as he rubs shoulders with various larger-than-life characters in the tumultuous war zone. Among them is trailblazing war correspondent (and future wife of Hemingway) Martha Gellhorn (Nicole Kidman). Soon, the two strike up a romance that is almost as fraught as the revolutionary backdrop. David Strathairn co-stars as John Dos Passos.

British comedy favorite Stephen Fry stars as the titular solicitor of an eccentric small town in “Kingdom:” The Complete Series. With the help of his earnest young legal intern and secretary, Peter Kingdom helps out the various residents of his small town while dealing with his crazy sister. It’s simultaneously heartfelt and hilarious.

Kelsey Grammer is frighteningly good as a power-mad Chicago mayor struggling to keep control of his crumbling empire in “Boss:” Season 2. This season picks up after Mayor Kane narrowly survived a coup attempt by rival ward bosses and his own inner circle. Now with a new staff, he sets his sights on rebuilding a crime-infested housing project.

Perhaps the definitive record of America’s most disastrous military campaign, “Vietnam: The Ten Thousand Day War” premiered in 1981 and ran for 26 episodes. Utilizing original on-the-ground footage, much of it from North Vietnamese sources, and CNN correspondent Peter Arnett’s in-depth analysis of the big picture, the series traces the history of the conflict, from its roots to its lasting legacy.

Stranger Than Fiction: Gear up for the soon-to-be-released Jackie Robinson biopic 42 with Jackie Robinson: My Story. This docudrama takes an original approach to tell the first-person tale of a monumental figure in the civil rights struggle and baseball’s history. As Robinson, Stephen Hill narrates his story, set to classic footage and rare photos, along with guest appearances by Robinson’s teammates.

Lost Angels: Skid Row is My Home is an affecting look at Los Angeles’ homeless population—the largest in the country. Narrated by Catherine Keener, the film follows eight people who live on Skid Row. The result is an incredible collection of portraits, with individuals like a former Olympian and recovered drug addict that put a face to homelessness and mental illness.

Actor Josh Duhamel narrates the stunning eco documentary Planet Ocean. Directors Yann Arthus-Bertrand (Home) and Michael Pitiot traverse the globe and dive beneath the surface of the oceans to bring home the importance of humanity, learning to live in harmony with what makes up 70 percent of the planet. The film features breathtaking cinematography from some of the planet’s least seen places.

From the Vault: Two under-seen gems are now available M.O.D. via the Warner Archives website. Key to the City is a charming romantic comedy with a picturesque San Francisco backdrop. At a convention for mayors, a rough-around-the-edges former longshoreman (Clark Gable) meets and falls for a proper, respectable New England mayor (Loretta Young). But their romance soon causes a scandal.

Cheyenne, directed by the great Raoul Walsh, follows a gambler (Dennis Morgan) who is forced to track down a stagecoach robber known as “The Poet” in order to avoid a jail sentence. To catch his prey, he has to pose as the outlaw and infiltrate his gang. Jane Wyman co-stars.