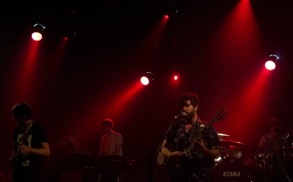 If Tuesday night’s sold-out show at the El Rey was a testament to how far Foals has come since forming in 2005, the chant that erupted across the dance floor would be even more proof.

“Foals! Foals! Foals!” a crowd of mostly 20-somethings anxiously shouted minutes before the curtain was drawn.

It had been more than two years since the indie rockers last played in L.A., but for those who caught their set at Coachella the weekend before, the chance to see them in a more intimate setting was as good of an excuse as any to show up.

“We like to come out of the blocks quite fast,” bassist Walter Gervers said in a heavy English accent a day before the headlining gig.

And that’s just what the Oxford-based quintet did.

After a brief stint from buzz-worthy band The Neighbourhood, Foals stepped on stage shortly after 10 p.m. and immediately captivated the audience with a couple of older tunes — “Total Life Forever” and “Olympic Airways” — before digging into some material from its latest studio effort Holy Fire.

The 11-track album, which was recorded in the band’s diminutive studio and released in February, not only warranted praise from both U.K. and U.S. media, but it also served as a teaching point for Gervers and his band mates when it came to the songwriting process.

“We learned a lot about how a song doesn’t need to be the sum of everyone’s parts in the band to work,” he explained. “It can be as much about being reserved as throwing everything out there.”

But at the El Rey, Foals let it all hang out as new tracks like “My Number,” “Bad Habit” and “Milk & Black Spiders” sent a room full of fans into a frenetic state. Of course, classics such as “Red Socks Pugie” and “Electric Bloom” from 2008’s Antidotes didn’t disappoint, either. For a performance that lasted more than one hour and 40 minutes, there were few — if any — letdowns.

Lead singer Yannis Philippakis was particularly provocative over the course of the night, showering the crowd with water and Heineken at one point before later leaping into a spider web of arms with his guitar. And when it came time for the band’s encore, he made sure to provide even more theatrics, walking to the back of the venue and climbing on top of the bar while strumming the notes to “Two Steps, Twice.”

Call Philippakis maniacal if you like, but you’d be hard-pressed to find anyone saying they were bored by what they witnessed. If it takes another two years before Foals returns to L.A. again, then it’s certainly worth the wait.