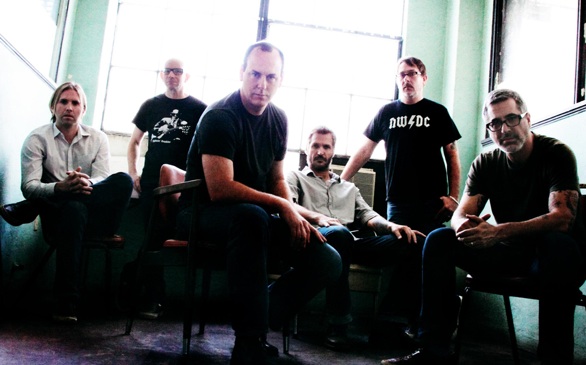 Bad Religion met and exceeded fans' expectations during its show at the Palladium.
(Credit: Myriam Santos)

Legendary punk rockers Bad Religion took to the stage at a sold-out show at the Palladium, proving they’ve still got what it takes 30-plus years after their inception.

Rabid fans of all shapes and sizes drained $12 beers and donned black shirts bearing the band’s infamous logo. The band warmed up to the sounds of Polar Bear Club, who took to the stage shortly after 8. Despite a questionably punk name, the New York rock-ish five-piece provided a serviceable set to the sea of black that rolled into the grounds.

Ironically titled L.A. natives the Bronx, who joined the tour late, heated things up with their high-energy hardcore punk that went over well with the now borderline drunk audience of 30-something, flat brim hat-wearing bros. Giving a shout out to all of the ladies in the crowd attending online college with scoliosis (really), lead singer Matt Caughthran cut loose on stage, playing tracks from the band’s latest release, The Bronx (IV) as well as many others from the band’s 10-year discography.

Rumor has it that the band opened for Bad Religion in their infancy and were booed off the stage, so it was wonderful to see that this was very much not the case. Framed by a giant, King Kong with flashing eyes, the Bronx polished off their roughly 45-minute set with a rousing performance of “Past Lives,” milking the crowd for supplemental screams. Despite a sound that is best suited for a small, sweaty club, the Bronx seemed perfectly at ease playing at the big Palladium. Diehard fans joined the many new Bronx fans in rabid applause as the band filed off the stage.

With a red polo and a hairline of a middle-aged accountant, Bad Religion’s lead singer Greg Graffin and company took to the stage around 9:30. Though Graffin’s hair might have disappeared, his voice certainly hasn’t, remaining one of the most iconic and unique sounds in punk. Radio-friendly hits like “Los Angeles Is Burning” and “21st Century Digital Boy” were interspersed with tracks off the band’s new album True North, like the family friendly anthem “Fuck You.”

The nearly two-hour set was a testament to the furious popularity that Bad Religion still holds today. Selling out the Palladium on a Thursday is nothing to sneeze at, and even more indicative was the loud, drunk and enthusiastic army of fans that came out for it. With a steady stream of new material and numerous continual tours to boot, Bad Religion shows no sign of slowing. Here’s to hoping for a 40th year anniversary.