The Material: April 21 @ House of Blues 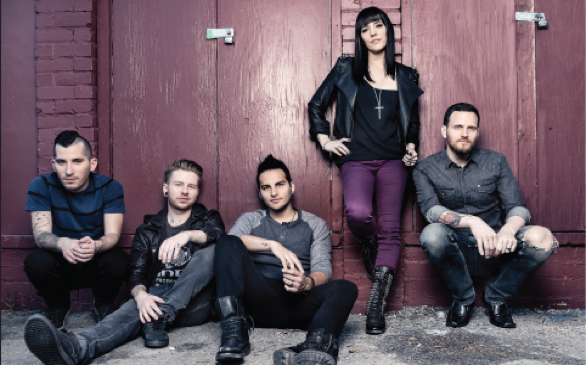 Powerhouse vocals, an adrenaline-packed crowd and a solid punk/rock sound that resonated for miles was all that could be seen, heard and felt at the House of Blues on the Sunset Strip this past Sunday night.

The Material left no ear unharmed with their enigmatic sound, and they kept all eyes in a trance as they put on an excellent show. Excited to play and share the night with fans old and new, Colleen D'Agostino (vocals), Jon Moreaux (guitar), Roi Elam (guitar), Jordan Meckley (bass) and Kevin Pintado (drums) kept everyone's heart racing at an all-time high, playing fan favorites and new songs off their latest record (released April 9) Everything I Want To Say.

Highlights from the evening included D’Agostino’s hauntingly beautiful vocals that turned from soft and soothing to a sultry siren radiating throughout the music hall. With a simple command from her and her band mates, the audience united in a chorus of sound, acting as live backup vocals on songs like “Life Vest,” “Gasoline” and “Skin and Bone.” Other great moments included the Material's group drum circle near the end of their set, which highlighted Pintado's crafty work.

With precision and jubilee, the band played and kept the energy up and running to the end and even through their encore performance. It was a great night on the strip both for rock music!