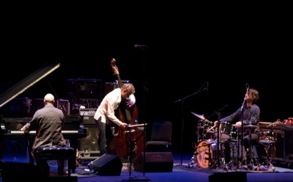 It’s not often you come across a band that continues to grow its fan base while consistently stretching the boundaries of experimentation.

For over two decades, Medeski Martin & Wood (MMW) has achieved such status with former ties to a major jazz label and a deep-seated connection to the jam band scene.

But while Blue Note Records and Phish remain partially responsible for putting MMW on the map in the early to mid ’90s, the trio has come a long way since releasing its debut album and playing gigs alongside the legendary Vermont four-piece.

Take, for example, Friday night’s show presented by the Center for the Art of Performance at UCLA.

With an amalgam of youth and middle-aged filling the seats at the pristine Royce Hall, MMW opened the first hour with an acoustic set that featured John Medeski — back turned and all — leading the charge on a shiny Steinway & Sons grand piano.

Longtime MMW fans, of course, have become accustomed to this sort of methodology from the Brooklyn outfit.

Ever since uniting with bassist Chris Wood and drummer/percussionist Billy Martin, Medeski has served as the band’s sonic focal point. And although he’s best known for his work on the Hammond B3 organ, Clavinet and Mellotron, the Floridian showed that he’s more than just a master of the keys when he shouldered a towering Slovakian shepherd horn and piped flute-like melodies to accompany Wood’s walking bass lines and Martin’s extensive collection of percussive gadgets.

To use a phrase the band has taken a liking to lately, the set was completely “wide open”— free of any shape or order as MMW explored a new musical avenue with each twist and turn it took.

The crowd subsequently responded, as some left their seats in the orchestra to dance upstairs in the balcony. By then, Medeski’s fingers were fully in overdrive mode, slapping one key after another without ever contemplating their next move.

Between Wood’s apprenticeships under jazz luminaries Geri Allen and Dave Holland, and Martin’s days at the Manhattan School of Music, there’s certainly no shortage of talent when MMW steps on stage. Yet, whereas Wood has made a name for himself by inventing a few techniques on his upright bass (one that even involves a sheet of notation paper), Martin still regularly defies jazz drumming traditions by blending hip-hop rhythms with Brazilian and African grooves.

The result of it all is a strange brew of jazz, funk and soul that’s uniquely MMW. It may not be the kind of jazz your grandpa grew up listening to, but that doesn’t mean it won’t leave its own imprint in music history books one day.

Yeah, some may call it “acid jazz,” and others may call it “avant-jazz.” As many found out at UCLA, MMW just calls it “wide open.”