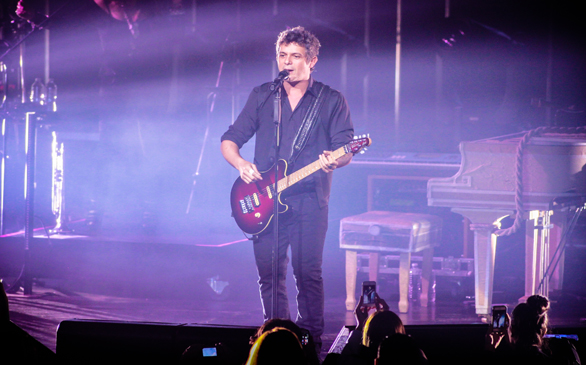 After witnessing the attending audience sing-along to his songs in the beginning, I decided to join in with no hesitation. For me, that moment arrived during the third tune Alejandro Sanz performed Wednesday night at Nokia Theatre L.A. Live.

That was “Se Vende,” part of the La Música No Se Toca album. It’s Sanz’s ninth studio album, one that’s received numerous accolades. The public, who truly enjoyed one of the Spanish singer-songwriter’s most fruitful shows ever, continued to sing. Perhaps it was due to the man’s good looks, often-unexpected hilarious humor, distinguishing raspy vocals or the love and hate message the piece carries. But one thing is certain, there’s no other artist like Sanz; he’s another level all by himself.

After all, Sanz has earned over 15 Latin GRAMMY and GRAMMY awards combined.

Sanz, who sported an entirely black fashion ensemble (pants, long sleeve shirt, belt and boots), appeared on stage at the same time as his band did. That depicted his nobleness even though he’s such a popular figure in the music industry not only throughout Latin America and the U.S, but worldwide. This is one of the reasons people love him so much; he’s not only talented and beyond successful, but Sanz’s also a class act.

As soon as a charming “Desde Cuando” finished, Sanz proceeded with a vibrant medley. It featured the guest appearance of Latin jazz trumpeter Arturo Sandoval, a legend, near the end. At that instant, a salsa-like scene quickly became a dancing spectacle for all of us. Seeing people joyfully maneuver their bodies with a Caribbean flow turned out to be one of the many highlights of the night, and that was satisfying both visually and physically.

The wonderful “Quisiera Ser” and “Camino De Rosas” followed, but what was next resulted being a vigorously romantic portion of the concert. Accompanied by four back-up singers, Sanz stood on the side his pianist – who delivered an enriching piano play. In all, Sanz sang three melodies, including the rather popular “Enseñame Tus Manos.” If the word beautiful doesn’t help describe this segment, I don’t what else can.

Sanz took a brief break, but he returned with even more energy when singing “No Me Compares,” “Corazón Partío,” and “No Es Lo Mismo.” Sandoval joined him yet again. Sandoval’s trumpet playing, to no surprise, captivated everyone particularly when Sanz played his acoustic guitar aside from him near the end of “Corazón Partío” – a pop-salsa sensation. That was brilliant, and it can be best classified as the most entertainingly electric live Latin music collaboration in history.

The likes of “No Es Lo Mismo” and Spanglish “Looking For Paradise” didn’t disappoint one bit. In fact, it left us wanting more and more. And Sanz gave more – four additional songs to be exact.