Paramore: May 1 @ The Wiltern 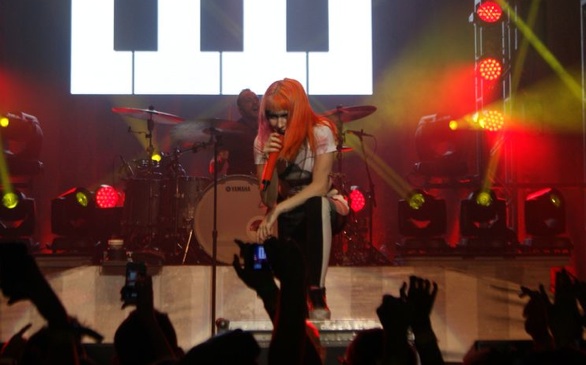 Fans lined up hours before the doors opened for the sold-out Paramore show at the Wiltern. Decked out in tees from past shows with their favorite Paramore lyrics printed on them (“That’s what you get when you let your heart win,” “Crush, crush, crush, crush” and “Lost the battle, win the war"), they sang songs to pass the time and swapped memories of the first time they ever heard the band's music.

Paramore rose to popularity in the mid 2000s (yeah, it’s a time reference now), and Hayley Williams has become one of popular rock’s most influential female leads of the past decade, with some of the band’s hits reaching the top of the billboards.

Last night, generations of fans showed up as well as a new legion of very young fans. Paramore’s messages of overcoming adversity, growing up and falling in and out of love have made their music constantly relevant.

The show was a mix of new tracks and old faves that brought the house down. Williams dominated the stage for a rockin' good time and chatted with the audience, thanking them for the support throughout the years, which led to a dedication performance of “Ignorance.”

Another fun thing Williams did: She dedicated “Still Into You” to Conan O’Brien, and she even donned a shirt with his face on it for the entire show. The only time the show slowed down was pretty early on when they performed “The Only Exception,” and Hayley asked the crowd to raise their cell phones and lighters up as they sang along to one of the most heartfelt singles Paramore has ever put out.

Aside from that, the show was a non-stop energetic ride. There was even an encore of “Proof” and “Brick By Boring Brick.” The band sure showed their devoted fans a fantastic time and left everyone wanting to see what Paramore is going to do next