Kvelertak: May 8 @ The Roxy 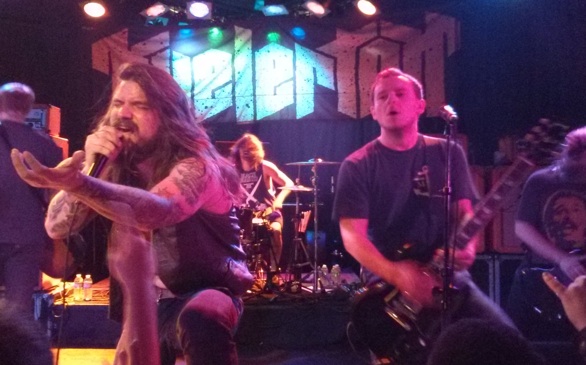 Though its heyday has long expired, infamous Sunset Strip venue The Roxy has somehow remained relevant long past the days of Mötley Crüe and Poison. After years of serving as a springboard for budding rock ‘n’ rollers, the venue seems to finally have started booking touring acts again.

And what a loud, sweaty glorious night it was on Wednesday, May 8 at the venue when Norwegian rockers Kvelertak took their turn on the stage. The band is coming off of the release of its second album Meir, which has garnered rave reviews by fans and critics alike.

One could hear opener Black Tusk from several blocks away, a testament to the power trio’s seriously loud and heavy sound. With each member contributed their own unique vocals, Black Tusk gave earlier attendees a bit more variety in a genre that can become weighed down in monotonous screaming. With hair down to the waist and a fiery red beard down to the chest, the guitarist and bassist for Black Tusk certainly looked every bit as metal as they sounded.

With a snappy name like the Cancer Bats, it’s hard not to pay attention to the show’s second opener, even on paper. The four-member band, fronted by Liam Cormier, was every bit as loud as its predecessor but seemed to crush a few Red Bulls before, as showcased by the members’ rampant energy. With more of a quick-paced punk sound than Black Tusk, Cancer Bats seemed to have just as many fans in attendance as Kvelertak. The high-energy metal/punk fusion certainly warmed up the place, a fact confounded by the rowdy circle pit.

Shortly after 10, Kvelertak took to the stage. The six-piece rock/metal act has exploded into the underground scene in the past several years and for good measure. Though Europe is no stranger to hard music of any kind, Kvelertak takes those traditional sensibilities and adds a healthy dose of unrequited American rock ‘n’ roll. The band is loud, shameless and sweaty. Not to mention, they’re entirely incomprehensible.

Vocalist Erlend Hjelvik has a loud, impressive swagger that’s always appreciated in a front man. You might not be able to understand a word he’s singing, but that hardly matters. The intoxicated crowd held nothing back during the energetic set, including several massive, overly aggressive pit bros that have become an unfortunate side effect of any show of this nature.

If the 30-person-deep merchandise line was any indication, everyone loved Kvelertak and wanted everyone else to love the band as well. Or, perhaps they could’ve been in line just so they could wear a dry shirt after surviving a sweaty, loud show. At the very least, it proved that The Roxy still has what it takes hosting unforgettable rock shows.