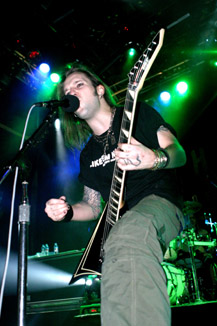 Despite receiving zero attention from the mainstream press, melodic death metal has been experiencing an unprecedented amount of popularity in the U.S. this year. With three melodic death bands making their way on to Ozzfest this past summer, and successful headlining tours from fellow Scandinavians Soilwork and Arch Enemy, it was still impressive that the Children of Bodom show at the House of Blues, an 1,100 person venue, sold out a good two weeks before the show date.

The HOB was packed full of old-school death-metalheads and Hot Topic kids by the time openers Amon Amarth went on. Amon Amarth was a bit of an oddity on this bill; unlike the trendier Children of Bodom and Trivium, Amon Amarth is a relatively obscure straight-up Viking death metal band. However, the crowd reacted very favorably. Maybe it was the music, maybe it was the energy of the band, or maybe it was the ram’s horn filled with alcohol that the shirtless singer drank from throughout the set. The vocalist also shouted out hilarious call-and-responses to the audience, including a pledge to turn the House of Blues into the "House of Metal." Not exactly subtle, but then, subtlety is a trait often lacking in fat men wearing no shirt and tight jeans.

Trivium’s singer, Matt Heafy, wasn’t fat or half-naked, although he was the prettier of the two vocalists by far. However, despite his more emo looks, he was all about the metal. Trivium is undeniably a metalcore band, but it’s closer to the metal side of the spectrum, and even though it wasn’t as heavy as the other two bands, and had less live experience, Trivium had a surprisingly confident stage presence. In fact, the band managed to get three circle pits going during their set. Not everyone was into them; there were some noticeable middle fingers in the air, and someone was heckling them between songs, but Heafy shut the heckler up by pointing out that he was the one with the microphone.

Children of Bodom, of course, didn’t have to worry about hecklers.

As soon as the lights went down for the headliners, the crowd started chanting their name. "Twist and Shout" came on over the speakers to get the crowd riled up, and then the Finnish quintet exploded on stage to the opening track from their latest album, "Living Dead Beat." The crowd started surging from the very beginning, Children of Bodom’s catchy, fast-paced melodic death metal the perfect music to mosh to.

Vocalist/guitarist Alexi Laiho was the real star of the show. The guy is a total rock star; he’s arrogant, shoots his mouth off in interviews and he’s been accused of being a sloppy guitar player live, but he knows how to work a crowd. He may not have hit every note, but the important thing in a concert is the feel, and he moved the show along at a breakneck pace. The band managed to cram 18 songs and three solos into a 90-minute set. In fact, everyone but the bassist got a solo. Their set was heavy on the last three albums, and they tore through such standards as "Needled 24/7," "Punch Me I Bleed," and "Hate Me!" Laiho even managed to fit in a small medley of Motley Crue, Pantera and Judas Priest songs before the last song of the night; if it wasn’t clear what his influences were before, that crystallized it.

And the band’s outro? The Beastie Boys’ "Fight for Your Right to Party," of course. Because really, what else is melodic death metal all about? —