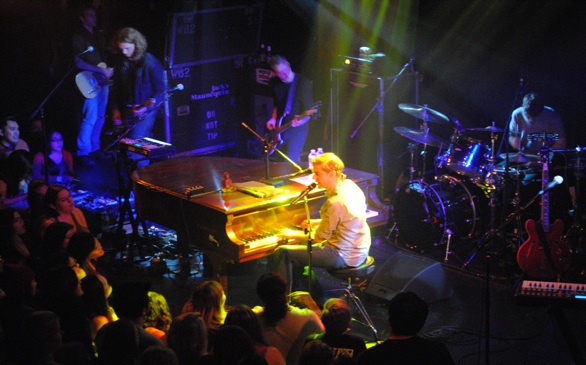 With the recent release of Andrew McMahon’s debut solo album, The Pop Underground, there’s been a lot of skepticism about whether or not the artist will remain true to his punk-pop roots during his solo endeavor. After all, it was this kind of music that garnered him a sizable following during his time in Something Corporate and Jack’s Mannequin. However, McMahon made it very clear to a packed Troubadour crowd on Wednesday night that the band embraced and planned on playing an eclectic set.

McMahon sat poised over the piano, looking over his shoulder at the crowd: “We’re going to play you some good music tonight – are you ready to dance?” The crowd, or the pop underground as McMahon has playfully named them in the past, roared with approval. An eclectic mix is exactly what the people got – McMahon played old favorites as well as new dance tracks such as “Learn to Dance” and “Synesthesia,” both of which showcased the dance/electro evolution of McMahon’s style since leaving Jack’s Mannequin and going solo.

The singer also paid homage to his teenage, Something Corporate years with “I Woke Up in a Car” and “Punk Rock Princess” – two songs that had even the shyest of attendees moving. The rest of the set pulled mostly from Everything in Transit and People and Things, although McMahon did spend some time prefacing “Swim” by alluding to his battle with leukemia.

He ended the show by thanking the crowd for attending and thanking them for their positive energy.“If we can all get together like this on a Wednesday night and make music and dance – life’s not too bad, right?” he asked. With one last song (“La La Lie”), McMahon exited the stage, leaving a very happy and fulfilled pop underground in his midst.