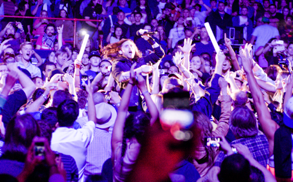 The day started off warm, with a party-like atmosphere. The audience included families and their young children. However, the majority of the audience contained 20-something-year-olds, and they were there to dance along to the music, drink and have a good time. By the end of the night, people were dancing in their seats and singing along to every song.

Atlas Genius took over the main stage first, and The Black Keys closed the night. Each band had its own special show to offer coming in on this rotating stage, which made for a break-free night of music.

With the line up, Weenie Roast was a festival with an indie feel. Imagine Dragons, The Neighborhood, and Of Monster and Men gave a soft alternative rock vibe that was broken toward the end of the night when the surprise guest came out.

Thirty Seconds to Mars' front man Jared Leto started the set in the audience, playing on an acoustic guitar. He made his way through the crowd and to the stage to continue the set. The band finished with confetti and an invitation to fans to join them on stage. Their loyal audience members screamed and rushed the stage in an attempt to climb on top, and there was a mosh pit by the time the invitations were closed. Their fans in the pit were nearly in fits of tears – this is something you don’t typically see from other bands’ fans.

Finally, the Black Keys closed out the night with a great set. Personally, they are always one of my favorite musical duos to see live. They were a great choice to headline Weenie Roast 2013.