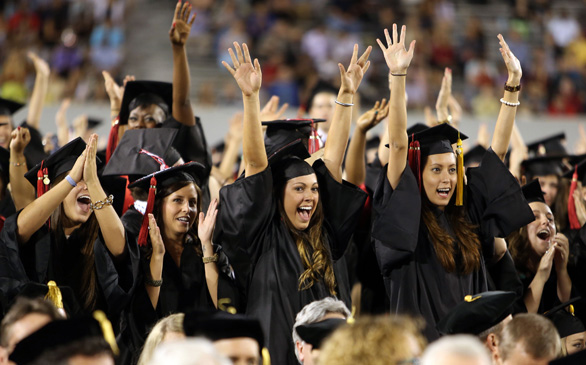 Jackie Carter had it all mapped out. She would attend college year-round and graduate early, land a job in criminal justice, start paying off student loans, move into her own apartment and invest in her first smartphone.

But the 22-year-old Towson University graduate has seen her life after college veer off course. Carter, who graduated in December with a degree in sociology/anthropology with a criminal justice concentration, is living with her parents in Fallston, Md., working as an intern and wondering whether her original goals are forever out of reach.

"If someone had told me freshman year of college that this is where I'd be 3 years later, I wouldn't believe you," said Carter, who has applied for 20 government jobs and lost one potential offer when the position was cut. "I thought I was going to have a job last spring. I was being interviewed. Now here I am - it's May, and I'm still kind of stuck."

Though the economic recovery has led to some hiring improvements, it remains a tough time to be a new college graduate.

Armed with degrees but little experience, this year's job candidates are part of the sixth consecutive class to push its way into a labor market with elevated joblessness and depressed wages. Federal spending cuts are making the hunt for government jobs even more competitive, and forcing some contractors and health care providers to cut back.

Recent college graduates face unemployment of 8.8 percent, compared with 5.7 percent in 2007, when the recession started. Underemployment, which adds in those who have given up searching and part-timers who want full-time jobs, has climbed to 18.3 percent for recent college graduates, compared with 9.9 percent in 2007, according to an Economic Policy Institute analysis of federal Bureau of Labor Statistics data.

"It's just bad luck, their misfortune to be born in a year that dumped them into this labor market," said Heidi Shierholz, a labor market economist at the Washington-based institute. She doesn't expect the market to return to prerecession employment levels for at least five more years at the current rate of job creation. "The outlook for the future does not look that great."

Shierholz said more recent graduates will have trouble finding work or will find jobs that don't require college degrees. And those who are hired will have lower wages on average, she said.

Even worse, she added, "they are unlikely to recover from that bad start." It could take an additional 10 to 15 years for them to reach the wages and stability they would have had if they started out in a stronger economy, she said.

Employers expect college hiring levels to rise somewhat this year, according to an April report by the National Association of Colleges and Employers. In the survey, employers said they will hire 2.1 percent more new college grads from the Class of 2013 than they hired from the Class of 2012. That projection was lowered from last fall, when employers had said they expected to hire 13 percent more new graduates.

Despite only slight gains in projected hiring, stronger demand among employers in fields such as health sciences and business is driving up average starting salaries, NACE said. Starting salaries are projected to average $44,928 for the Class of 2013, a 5 percent gain from last year's average, an April NACE survey showed.

Some students have found the competition for jobs so fierce that they've become resigned to taking unpaid jobs if necessary.

Samantha Schlosburg, a Goucher College senior who will graduate this month, hopes to use her psychology degree in a school counseling, sports or forensics job, but said she now realizes "you can't really do much without a master's or Ph.D."

Her search for a job - one that will allow her to repay student loans and save for graduate school in 2014 - is proving more difficult than expected. She turned down a summer camp job after interviewing with AmeriCorps, but after three weeks, she had not heard back and was preparing to send out resumes again. Her preference is a part-time job, followed by a paid internship. An unpaid internship would be a last resort.

"At this point, I'll be happy to get anything, but I would prefer for it to be psychology-related," said Schlosburg, tossing a Frisbee with a friend on the Goucher campus on a recent Friday. "I feel like I'm overqualified for any entry-level job and underqualified for anything else. It's hard to find the middle ground."