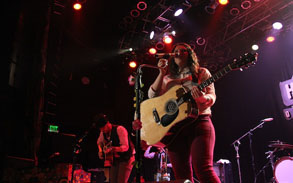 “I love them. That was such a great performance,” an unidentified woman said to her group of friends after walking out of the House of Blues Anaheim on Tuesday night.

She was, of course, referring to the Mexican pop-rock duo Jesse & Joy. The brother and sister music act made a stop in the Orange County venue during their “Latinos Imparables” tour, which featured Lilo as the opening act. Throughout the show, Jesse & Joy delivered live portrayals of their classic and most recent repertoire.

While a sold out crowd awaited their presence, the four-time Latin GRAMMY winners Jesse & Joy hit the stage right on time: 8:15 p.m. Jesse appeared first, while he hand held his guitar. Joy followed, and she carried a luminous smile that lit up the pre-meditated dark scenery of the HOB Anaheim. At that moment, the audience screamed, smiled, cheered and applauded – that was electrifying. I’ve never seen anything like that.

Seconds after the opening tune concluded, the duo followed with “Espacio Sideral.” This track brought back wonderful memories to when the duo first formed in 2005 and went on to rapid popularity due to the success of their debut album Esta Es Mi Vida. The upbeat song instantly became a part of the public, who sang and danced along to the lyrics from beginning to end.

“Llevarte al espacio Sideral y volar como lo hace Superman,” fans sang occasionally. The song itself could very well be classified as one of the public’s favorites, but that’s up for debate.

What came next was adorable: “Gotitas De Amor.” Sporadically fast in tempo, “Gotitas De Amor” serves as a reminder that they are legitimate songwriters, and creative ones as well.

The likes of “Si Te Vas” and “Llegaste Tu” went on to steal our souls, while “Esto Es Lo Que Soy,” “Me Quiero Enamorar,” and “Volveré” did more of the same. During the performances of these five songs, Jesse & Joy’s chemistry sparked a romantic scene within friends and couples. And that was nice to witness!

“La De Mala Suerte” and “Llorar” were the ideal tracks leading up to the end of the show, which featured the incomparable “¡Corre!” as their encore. “¡Corre!” is a melody off of ¿Con Quién Se Queda El Perro?, the best album of 2012.

In all, Jesse conquered the hearts of all the present ladies and impressed the gentlemen. With his catchy guitar and bass playing, chorus singing and undeniably talented fingers on the piano, Jesse proved he’s one-of-a-kind. On top of that, Joy’s presence on stage turned out to be beyond charismatic and often charming. Her voice is unarguably one of the best in all of Latin America.

Together, Jesse & Joy truly are one of the best duos of all time with regards to the Latin spectrum. If you thought Jesse & Joy are great to listen to off a previously recorded piece, (via the radio, Internet, album) you’re entirely right. But do know they’re even better live.