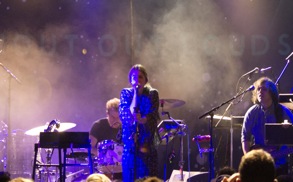 New York-based band HAERTS has yet to release an album, but it’s already stirring up buzz after producing first single “Wings” with St. Lucia’s Jean-Philip Grobler.

Coming off this year’s stop at South by Southwest that featured a handful of record company showcases, the five-piece finally made it to L.A. last week as the opener for Swedish indie poppers Shout Out Louds.

And for a band in the midst of its first U.S. tour, HAERTS still found a way to charm a relatively subdued crowd on the second of two nights at the El Rey.

Lead singer Nini Fabi made her presence known right away, sporting a black Japanese-style robe and crooning her lungs out to summery, feel-good songs like “All The Days,” which only hit the group’s Soundcloud page late last week.

But from the looks and sounds of it, HAERTS may be onto something — even if there are already countless of other synth-heavy electropop acts bumming around NYC these days.

Its upcoming debut album on Neon Gold Records/Columbia Records, in fact, could easily be the next big contribution to Brooklyn’s burgeoning new wave scene, one that newfangled pioneers like Twin Shadow and St. Lucia have helped grow over the last two years.

Now with its tour continuing alongside Australian indie rockers Atlas Genius for the next month, HAERTS will have more opportunities to hook fans before returning to the studio to finish recording.

Because although the band’s 30-minute set at the El Rey felt somewhat like a tease, it also left hope that this wouldn’t be the first and last time HAERTS ever plays in L.A.