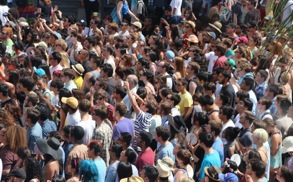 The crowd briskly flaps their fans, which they scored from the Amoeba Music tent, like a murder of crows. Instead of the remains of a posthumous squirrel run over by a Toyota Corolla, the band of fluttering fiends settle for a feast of indie rock music. They’re rabid for the electro-induced guitars, skinny jeans and purposely ironic lyrics. I’m at the main stage now, and the torrid heat makes the virulent beasts restless. I best seek shelter before 2013’s Make Music Pasadena festival gets ugly.

Barney’s Beanery, on East Colorado Boulevard is my safe haven from the sweltering heat and rowdy crowd. With the main stage below me, I have an omniscient view of the sweaty hipsters to conduct my research. I tower over them from the upstairs bar area with a cold beer, an all-seeing window and my pony-tailed waiter, Charlie.

“Last year, there was a line out the door by 11,” said Charlie, a self-proclaimed Norah Jones fan. It’s currently 1:15 and my accomplice, Ben, and I are the only ones sitting in the bar. What had happened this year?

Below, A House for Lions catered to the jittering gyrations of the paltry crowd. Along with providing a haunting rendition of The Pixies “Where is my Mind” (a violin can make songs both beautiful and creepy), lead singer Daniel Norman tosses water on the famished dancers. The Old Pasadena Indie Rock Stage, where this is all going down beneath me, is just one of 30 stages scattered throughout the streets of Dena for the festival, and there’s more than 100 bands playing.

Looking at the set list, I felt reminded of Jimmy Kimmel’s Coachella skit where he interviewed festivalgoers about imaginary band names. Of course, in an age where it is encouraged to constantly be aware of burgeoning yet unknown artists, the wannabes acted accordingly—one girl expressed her delight to see “Regis & the Philbins.”

Unfortunately, I can’t say the same. I have never heard of Lucid Fly, Deep Fried Bubblegum or the Ukulele Orchestra of the Western Hemisphere.

Due to the lack of customers in Barney’s, Charlie entertains himself by talking to Ben and I, flinging coasters across the room, or boyishly flirting with his fiancé. His muse, with her bright hazel eyes, dark brown hair and a tattoo of a shooting star soaring behind her right ear, informs us that, “Old Town Pub is raunchy.” This is another venue where groups like Kid Cadaver and The Rebel Light were to be featured. She continues, “It’s dungeon-like and the stools are uncomfortable.”

We opt to hang out at Barney’s for a little longer (Why not? The stools are cushiony here!) And plus, Y?CHT is coming up at 3:15 right below us.

Y?CHT, and electro-indie dance punk group, primarily fueled our motivation to come to Pasadena. The band had a decent sized crowd now, and they were vying for our prime spot. After a rumbling drum solo, guitarist Jona Bechtolt came out and yelped, “Pasadena! What the f*** is up?” Following the crowd’s fawning response came an even bigger one—Claire had walked out.

Claire L. Evans, Y?CHT’s debutante and lead singer, captivated the crowd with her serenading utterances and elegant beauty. She sauntered across the stage and at times, the crowd froze to admire her sophisticated poise. Before finishing with a new track, Evans illuminated the crowd: “We have seen it all, and Pasadena takes the cake. Take that cake Pasadena!”

In contradiction of Charlie’s premature prophecy, the masses did make it out to the Make Music Pasadena festival. Maybe it had been a hangover from the night before that had kept them from making it out promptly, but that’s nothing a stiff IPA from the bar at Barney’s couldn’t heal.

Yes, and so it was. The sun went down as lights went up, and guitar solos twanged out sideways above the crowds. As the tumultuous sun beat down throughout the day, the hipsters eventually went home satisfied once again, with a belly full of indie-rock.