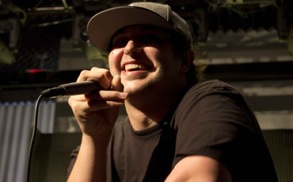 Whether it’s been releasing his music for free or founding his own record label, the Colorado-based producer has quickly changed the landscape of electronic dance music since arriving on the scene seven years ago.

So for Pretty Lights’ upcoming album A Color Map of the Sun, Smith wanted to take a new approach to the beat-making process.

Instead of combing through stacks of vinyl to find his samples, he set up shop in Brooklyn and New Orleans to work with a bevy of classically trained musicians and organically create the pieces that would make up his fourth full-length studio effort, which is set to be released on July 2.

Coming off a performance at Bonnaroo last weekend that once again went into the wee hours of the morning, Smith arrived in L.A. on Monday for a Q&A session with KCRW music director Jason Bentley at Sonos Studio.

While Smith elaborated on the methods he employed to produce the record, he also revealed his plans to recreate the process by touring with a live band someday soon. After all, just hours earlier, VICE had unveiled a 26-minute documentary film that delves into the two-year journey Smith embarked on to make A Color Map of the Sun. And for those who attended the 21-and-over event at the acoustically designed gallery, they were treated to that footage and much more.

After fielding questions from Bentley for a half hour, Smith took his place behind the decks, slipped his Yankees baseball cap over his eyes and put on a private Pretty Lights show that his fans will remember for a long time.

Performing exclusively new material for almost two hours, Smith had the small crowd grooving to soulful tracks such as “So Bright” and “Around The Block” as fog and light filled the room. He even pulled a rabbit out of his hat before it was all said and done, dropping his brand-new remix of Bob Marley’s “Exodus” that will appear on Legend: Remixed (coming out next Tuesday, June 25).

The album is an impressive feat for Bentley, who teamed up with Stephen Marley to curate the 16-track LP that features guest spots from Jim James, Beats Antique and Thievery Corporation. But Smith’s take on the reggae legend’s hit single could be the best of them all.

Because with the way he mesmerized his spectators on Monday night, Pretty Lights only continues to show there are no limits to his madness.