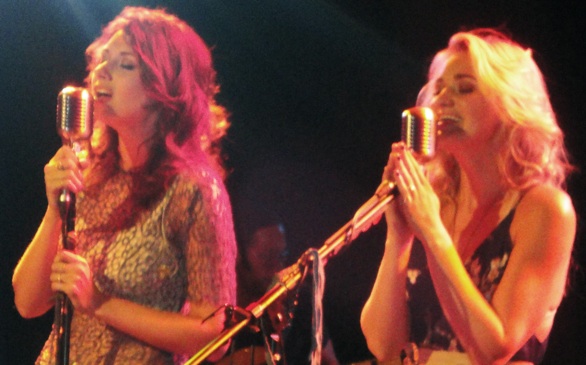 We’re all wondering it…who the heck is 78Violet?

Fresh off a five-year musical hiatus, Disney Channel darlings Aly and AJ Michalka (aka 78Violet) have transformed their singing brand and are baring themselves on their completely self-financed new album, which is unnamed and due for release later this summer.

Living alone in New York while making the album, the singers claim that the city's energy influenced much of the resulting music.

June 26 marked their monumental debut back into the live performance scene at West Hollywood’s historic Roxy Theatre, where the sister duo debuted an eight-song, 50-minute set comprised of all new music. Their new sound can be best described as mellow, non-processed pop.

At the end, they performed an acoustic version of one of their original smash hits, “Potential Breakup Song” to an audience who appeared to know every single word.

78Violet has achieved what many young female pop singers are missing currently: maturity. Not only did they conduct themselves as the adults that they are, the sisters’ voices sound their age, as well as raw and talented. While no one in the audience knew the lyrics to the new songs, the subject matter was simple enough to understand.

Their songs are age-appropriate, and that the composition of the music matched perfectly. With a genre of fans getting tired of young and cheesy Taylor Swift songs, 78Violet is beyond refreshing for the ears, and they appear to have a much better grasp on what it really means to be a youth in their 20s.

While 78Violet exudes true talent, the sisters are very lucky to have their previous, fiercely loyal Disney Channel following. These fans will make their music relevant in the pop world, and many of who appeared to be at the Roxy seemed ready to welcome the sisters back with open arms. Without previous fandom, it's safe to say that many of 78Violet’s songs would be discounted as pleasing to the ears but lacking the ultra catchy sounds and beats of a current Selena Gomez or Demi Lovato hit.

Possibly the best part of 78Violet and their live performance was the sisterly banter between Aly and AJ. These classy ladies appear to have great senses of humor, as they playfully teased each other about boys and life. Honestly, the relatable nature of their personalities will sell their music for them.

Aly and AJ of 78Violet are living proof that personal hard work, true talent and just a touch of luck are a great formula for success and that Disney Channel can launch legitimate, non-crazy careers.

Expect to hear some of their new music this summer on the major L.A. radio stations, and catch their single “Hothouse,” debuting July 8.