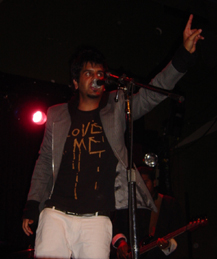 With Dios (Malos) being so proud of its upbringing here in the South Bay, playing at the El Rey for the last show on its national tour was a pleasant homecoming.

Injured lead singer/guitarist Joel Morales entered the stage with crutches and a leg cast, heading straight for a seat at his keyboard. But his immobility didn’t last too long. He stood up two songs later to whip out melodically breezy guitar solos, layered smoothly over the flowing basslines from J.P. Caballero. Jackie Monzon’s impeccably clean and concise beats showed he had the talent to match his showy, clear Vistalite drum set.

Guest keyboardist for the tour, Ed Kampwith, did a superb job filling in for Jimmy Cabeza DeVaca, who is rumored to be on house arrest for punching a horse cop. (Note: it is not known whether the horse or cop was assaulted.)

Their set list included several hits off of their latest self-titled release, like "So Do I" and "My Broken Bones." They acted along with of the vibe of "Grrrl," presenting a silly undertone to what at first seems like just another love song. Morales sang: "I’ll love you to the end / Psyche! I’m just kidding / Because I hate the things you do."

Hailing from the humble city of Hawthorne, the boys of Dios (Malos) have been compared repeatedly to hometown heroes, the Beach Boys. This is not an insult by any means. Dios’ innovative musical pop style captivates an audience in a similar fashion as the Beach Boys did, minus the surf mentality. Simplistic and catchy choruses and hooks grab attention, but the band’s clever and genuine approach is what really sets it apart. Seeing the group live validates why it’s music is so easy to like.