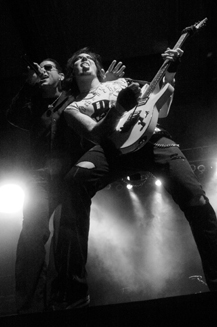 Like it or not, the members of Avenged Sevenfold have all the right ingredients for "recipe badass". They’ve got attitude, style and have even gone as far as to strip their true identities by taking on assumed names.

In support of the band’s breakthrough album City of Evil, the Orange County-bred fivesome returned home to spread a little evil to its hometown fans.

With its combination of visuals, lights and larger than life appearance, Avenged’s live show is just as intense and dynamic as the music it creates. Those who know little about Avenged Sevenfold may view them as a self-indulgent, "I’m too cool for you" band, but those who do fail to notice that Avenged Sevenfold is bringing back the one big thing lacking in today’s live music scene: a show.

After what seemed like eternity, M. Shadows and company came roaring onstage, amid billowing fog with energy and amps set on high for the opener "Second Heartbeat," followed by "Beast and the Harlot." The audience, a unique combination of metalheads, pre-pubescent teens and M. Shadows look a-likes circled the huge pit, as their way of welcoming the badasses of modern metal home.

Although the band played few songs off its sophomore album Waking the Fallen, due to Shadows vocal problems, those that were played – "Chapter Four" and "Unholy Confessions" – were met with a huge reception.

The bands words were few in between songs, but for the Iraq inspired power ballad "M.I.A." Shadows remarked, "It’s not about Democrats or Republicans," rather he explained, its about being American – as he dedicated the number to the soldiers fighting for this country.

The band’s two-song encore included a beautiful and powerful performance of "Strength of the World," which included a string quartet and ended with the Hunter S. Thompson inspired"Bat Country." There’s no mistaking that when onstage, Avenged Sevenfold carries a certain demeanor and presence that is hard to take your eyes off of. Unlike anything else in today’s metal/punk scene, there’s no doubt that Avenged Sevenfold are well on their way to becoming legitimate "rock stars."