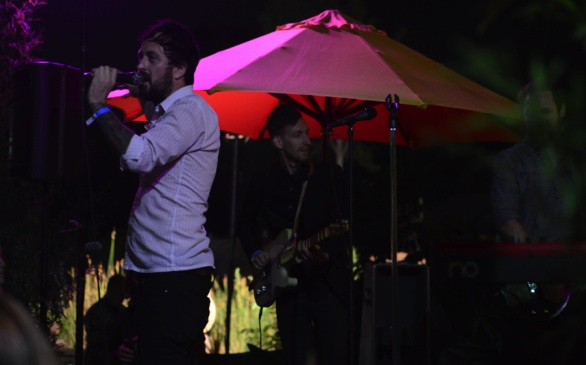 Los Angeles is filled with venues I love, and every once in a while I get to go to a new one. The Los Angeles Zoo is a unique venue, and it's a beautiful hangout after dark.

The LA Zoo was filled with hipsters eating Coolhause ice cream, couples watching the black and white swans and a few excited 20-somethings riding on the carousel. There was a small stage set up for the boys of NO toward the top of the zoo where the elephants are usually the main attraction.

Playing songs from their upcoming new album, the six members of NO made their way to the mini stage and the audience erupted in screams. Front man Bradley Hanan Carter even dedicated one of their songs to the star of the zoo: the elephant.

Coming off of a busy European tour, the band hasn’t wasted any time in getting back to performing in L.A. Playing a few weeks ago to a full house at the Bootleg Theater, the zoo and more to come, the guys are gaining a much deserved following in their hometown. Made up of an international group of musicians, NO has been making its way around the world this year, opening for bands such as the Smashing Pumpkins.

While I did love the zoo's atmosphere and was more than happy to be there after hours and see the animals in their more quiet state, I like seeing NO on a larger stage. In fact, this band's sound can fill a stadium.

Nevertheless, the bars, food trucks and great music created a perfect date night for the many couples that made their way there. Nights like these are why I love L.A. summers; everything turns into a venue, and every night is filled with music.