Fitz And The Tantrums: July 27 @ The Wiltern 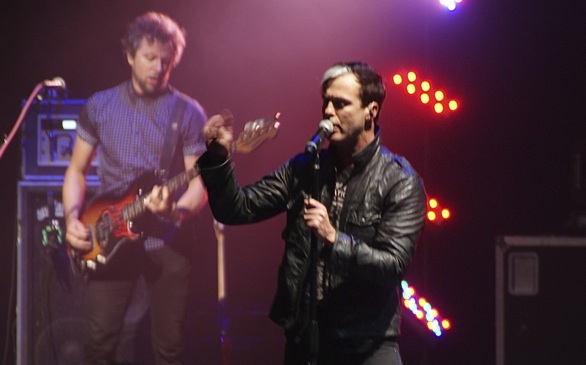 On Saturday, Fitz And The Tantrums returned to their hometown of Los Angeles, taking the stage at the infamous Wiltern Theater. Fans were packed inside the iconic Hollywood venue, and the energy was at an all-time high as Fitz (Michael Fitzpatrick) and Noelle Scaggs grooved into their first song, “Keeping Our Eyes Out,” off their latest record, More Than Just A Dream.

Fitz and Scaggs were on point delivering beautiful harmonies and kept the audience dancing all night long with infectious neo-pop tunes such as “Breaking the Chains,” “Out Of My League” and “The Walker.” James King (saxophone), Jeremy Ruzumna (keys) and Joseph Karnes (bass) also upped the anty with clever licks, catchy riffs and incendiary solos that kept everyone's vital signs up and running throughout the night. Also not afraid to tackle the realm of live cover songs, the band busted out the Eurythmics’ popular hit “Sweet Dreams (Are Made of T,” a perfect and very complimentary number to their set that had the crowd going nuts.

Along with the infectious tunes Fitz and the Tantrums churned out this evening, their stage was dressed to the 9's with amazing lighting that added the perfect touch to the band's live performance. Hanging right above Fitz's head at center stage was a huge lit-up heart, continually changing in color throughout the evening. Almost rhythmically in-sync with drummer, John Wicks', charismatic beats, it was as if he was conducting the lights to bid the band's will. Strobe lights and beams danced around every song.

Accompanied by bands The Colourist and Parade of Lights, who opened up for Fitz And The Tantrums, the whole evening was well-received by Los Angelenos.