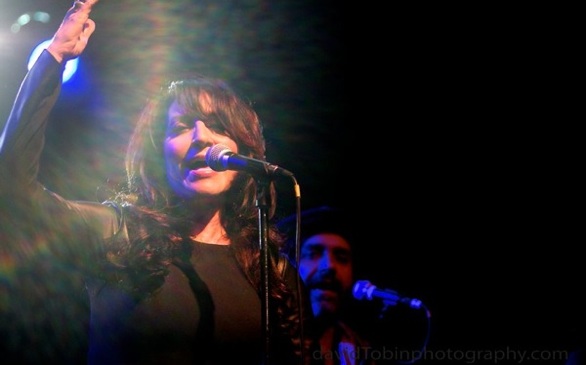 A lot of times, we hear that an actor is going to make the move to music. It's usually met with skepticism and restraint. But when that actor started out in music before heading to the screen, it’s a different story. And in this case, it's a very different story. The actress in question is Katey Sagal. Most know her as Peg Bundy from "Married with Children," Leela from "Futurama" and most recently, Gemma on "Sons of Anarchy."

Sagal actually got her start in music. She backed Bob Dylan, Tanya Tucker and a member of Bette Midler’s group The Harlettes before she ended up on the screen. And as far as I was concerned, the acting comes second to this woman.

Her voice was AMAZING at the "Sons of Anarchy": Season 6 Celebration on Sunday night. Supported by a phenomenal band, Sagal ripped through some originals in addition to plenty of soul and blues covers. She carried the packed El Rey through renditions of classics that seemed to take on a new life with her tone and attack.

Special guests joined Sagal on stage, but the one that seemed to have the biggest impact was when her 17-year-old son, Jackson White, got up with his guitar and did a duet. You could see the pride in this mother's eyes as they sang the ballad together. It was truly a special moment for everyone in the room. After all, it's not every day you get to see an accomplished actress and musician take the stage with her kid and kill it.

The night went on, and the crowd got its full of music, and the theme song to "Sons’s of Anarchy" played live for them by the original singer, Frankie Perez.

From what seemed to be a night all about a TV show, it turned into a night of music that focused on the amazing set of pipes in a woman that has constantly changed her image, but never lost her voice. If you have a chance to catch Sagal live, it is a must-see for any true music lover.