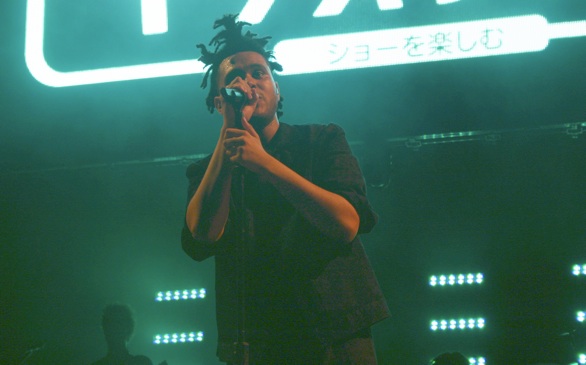 The Weeknd serenaded, wooed and got the crowd hyped during his performance at The Greek.
(Credit: Sydney Champion)

When Abel Tesfaye, better known as the Weeknd, first wrote down the lyrics for “The Morning” (on his 2011 debut mixtape House of Balloons), I wonder if he ever dreamed of selling out two back-to-back shows in Cali’s most beloved town at the famed Greek Theatre?

Since the September release of his major-label debut album, Kiss Land, Tesfaye has been hitting up cities across the country for his fall tour. On Monday night, he performed in Los Angeles, making his debut at The Greek.

The outdoor theatre was packed with an overwhelming number of young women donning high-waist shorts, crop tops bearing their midriffs, boots, dark lipstick and heavy eye make-up. Some even came clad in tight nightclub dresses and heels. As for the men, many of them were dressed casually (jeans and T-shirts), with a beer in one hand and an occasional banned cigarette or blunt in the other. And of course, many attendees wore T-shirts with “XO” written on the front – the symbol for the Weeknd’s own imprint label, XO. These Angelenos were ready and anxious to see the man with the haunting, contemporary R&B lyrics finally perform.

Once the lights went down, opening act Jillian Banks, who goes by her stage name “Banks,” came to the stage. A gorgeous brunette with enchanting vocals, Banks is sort of a cross between Florence Welch from Florence + The Machine and the late Amy Winehouse. As she slinked seductively in a tight black skirt and shirt combo, the crowd shouted their approval, especially when she hit those powerful notes.

After a few songs Banks left the stage, much to the crowd’s displeasure (“No, don’t go!” yelled one young man). But once she exited, house DJ Anna Lunoe started mixing, and the crew began preparing the stage for the main act. Quickly, the air filled with a mixture of anticipation and excitement.

Tesfaye appeared inside a sort of white drape that slightly resembled an insect net. He sang a few lines of his first song in this drape/net thing until a projection of a black and white face singing the lyrics appeared in front of it. Then, the drape/net disappeared, the stage went black, and he re-appeared in clear view right before us - all you could hear was the crowd yelling ecstatically.

Energy is not something Tesfaye lacks during his live performances. He worked the entire stage, clapping with the audience and bowing down to them. Although I wouldn’t necessarily classify him as a dancer, he sure showed us whatever moves he had that night: spins, jumps and even Michael Jackson-esque moves.

If you go to one of Tesfaye's shows, you can also expect a good use of multimedia. Throughout the show, images of Tesfaye himself, green Matrix-like Japanese writing with a cat (or was it a squirrel?) cartoon popping up now and then (staying in theme with Kiss Land, which is Asian-inspired) and beautiful women were displayed on the monitors in the background.

Tesfaye performed a balanced mix of his songs from earlier mixtapes House of Balloons and Echoes of Silence (not so much Thursday), his compilation album Trilogy and the new Kiss Land. Fans cheered loudly and sang along to old hits “House of Balloons/Glass Table Girls,” “The Morning,” “The Party & The After Party,” “Next” and more.

When he got to the spacey, ethereal “High for This,” the energetic mood changed into something a little more sultry and sexy. Guys who brought their girlfriends grabbed their ladies by the waist, and they grinded to the seductive beat and lyrics.

Things got a little steamier, during his performance of “Kiss Land.” This is when two half-naked women appeared on the monitors (again great use of multimedia), and wildly began making out with each other. Most of the crowd stopped dancing and just stared at the monitors as the girls got completely naked and even began performing oral sex on one another (don’t worry, you couldn’t see everything), much to the guys’ pleasure.

Towards the end of the performance, Tesfaye took the mic and spoke out to Los Angeles: “I want you to remember this moment for the rest of your life,” he said. He explained that for his previous work, he wrote his songs in his hometown of Toronto, Canada. However, for Kiss Land, he wrote the songs traveling the world. “This song is dedicated to Cali.”

He then jumped right into “Pretty” from Kiss Land.

A few minutes later (after "Wanderlust"), Tesfaye took his bow, waved goodbye to the fans and left the stage. A surprisingly large number of fans left at this point – did they really think he would perform a show without singing his popular hit “Wicked Games”? Come on.

So, “Cali is the mission,” is it Mr. Tesfaye? Well, mission accomplished.

The Weeknd will be performing again at The Greek in Los Angeles on Tuesday, Sept. 17.