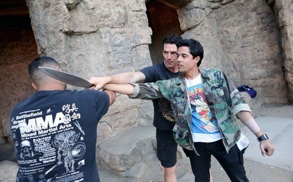 Last week, to celebrate the DVD release of the summer hit film World War Z, a group of journalists gathered in the picnic area at LA's Old Zoo to gain valuable tips on how to survive during an apocalypse.

Survival specialist Sam Sheridan (who is also the author of The Disaster Diaries: How I Learned to Stop Worrying and Love the Apocalypse) gave participants critical survival tips, showed them how to cope with fear and described the essentials of a bug out bag.

But what happens when the apocalyptic world is hostile, with zombies, monsters and cannibals ready to attack and kill you? Well, knife-fighting instructor and Grandmaster martial artist Mark Mikita was also at the event, and he taught participants how to use virtually anything as a weapon to combat zombies or whatever might pose a danger to survivors.

And of course, no one can survive an apocalypse without food, which is why chef and foraging coach Bryce Waring from Food Fetish taught attendees all about surviving on indigenous wildlife and plants by hunting and foraging for edible food.

A bonus guest at the event included actress Daniella Kertesz (she played Israeli soldier Segen in the film), who told attendees all the details about working with star Brad Pitt and bringing World War Z to life.

Make sure you pick up a copy of World War Z, which is currently available on DVD, Blu-ray, Blu-ray 3D and On Demand.