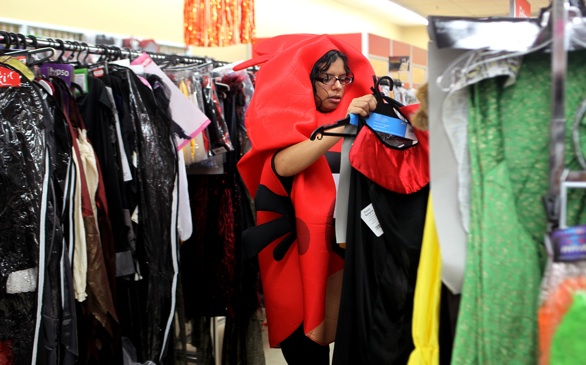 Looks like the most frightful ghoul this Halloween season will be the specter of the weak economy, as Americans spend less on this year’s creepfest than they did in 2012.

Some 158 million people are expected to observe the day, according to a survey Monday from the National Retail Federation.

But that’s down from a record high of 170 million celebrants in 2012. And each of those people will spend $75.03 on costumes, decorations, candy and other merriment, a decline from the $79.82 they shelled out on average last year.

Part of the problem may be the cool weather, which also dampened retail sales in the spring.

But a quarter of the 5,290 consumers polled by the trade association said the uncertain state of the economy will affect their spending plans, with 86.1% saying they’ll spend less overall.

Still, total spending for Oct. 31 will settle around $6.9 billion -- a nearly 55% boost since 2005, according to the retail group. And shoppers are starting early, with nearly a third launching their Halloween product hunt before October.

Sales of pet costumes will run to $330 million. More people than last year will look to the Pinterest website for ideas.

More than 7 in 10 Halloween participants will hand out candy, which will get nearly $2.1 billion in sales.

About $2 billion will go to decorations, making Halloween the most spruced-up holiday behind Christmas. Greeting cards will garner $360 million in sales.